Get the app Get the app
Already a member? Please login below for an enhanced experience. Not a member? Join today
News & Media Helicopter pilot sets eight records 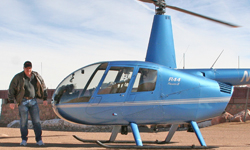 The records were set in a Robinson R44 Raven II helicopter. He set five new records and broke three that had been in place for 50 years. The speed records range from 90 knots to 116 knots, while the altitude records were at 11,056 feet and 14,111 feet. Young’s landing on Pike’s Peak earned him the “Most Memorable Aviation Record of 2009” by the National Aeronautical Association.

Young is an ATP in helicopters and single-engine fixed-wing aircraft. He works as a pilot for Colorado Vertical and gives tours, supports videography, and performs aerial thermography. He has been flying since 1982, mostly in the Rocky Mountains. Young also instructs corporate pilots in mountain flying and has more than 1,200 landings above 10,000 feet.

“I love the challenge of search and rescue,” Young said. “Sometimes it is finding a needle in the haystack, but it is so rewarding when you find that needle.”