Get the app Get the app
News & Media Sporty&rsquo;s awards sweepstakes airplane

Sporty’s Pilot Shop awarded its sweepstakes Cessna Skycatcher May 15 as part of its annual fly-in and open house. The lucky winner was Alan Horowitch of Yuma, Ariz. 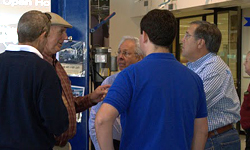 Michael Wolf, president of Sporty’s, called Horowitch right after the announcement at Sporty’s headquarters in Batavia, Ohio. In a cruel twist of fate, Wolf’s call rang and rang until Horowitch’s voicemail answered the important call. “Hello, Alan,” said Wolf. “This is Michael Wolf. I have something really important to talk to you about. Give me a call back.” Those in the assembled crowd were no doubt disappointed to not win, but Wolf’s lighthearted attitude gave them something to laugh about. “I thought I had him,” he said. Wolf had called Horowitch in advance to try and make sure he’d be there.

The call was only one of many highlights on a day filled with a beautiful blue sky and lots of airplanes. Wolf said they almost ran out of parking at noon, prime time for free hot dogs. It was the biggest airplane attendance ever for the event, which also featured seminars, exhibits, and lots of airplane talk. 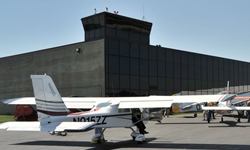 Cessna brought a Caravan, a Corvalis TT, a Citation Mustang, and a 182 to the event. Headset manufacturers such as Lightspeed and Signtronics came, as did avionics manufacturers such as Aspen, Avidyne, and Garmin. AOPA President Craig Fuller brought along some friends to enjoy the general aviation experience and blogged about the day.

Seminars included one from Garmin on its systems, and one from Eric Radtke, president of Sporty’s Academy, on learning to fly. Offered in connection with International Learn to Fly Day, the seminar was filled with prospective pilots, many of whom took advantage of intro flights being offered.

But the highlight of the event was the giveaway, which is open to any Sporty’s customer who’s placed an order or requested a catalog in the previous year. That includes merchandise purchased through Sporty’s in the AOPA Store. And the more you shop, the more times you’re entered. The Skycatcher is the first LSA Sporty’s has given away, and it was serial No. 5 from Cessna. No doubt Horowitch, already a Cessna owner, will enjoy his Skycatcher—if he ever calls back.