Get the app Get the app
AOPA Members DO more LEARN more SAVE more - Get MORE out of being a pilot - CLICK HERE
News & Media Pacific to Atlantic, nonstop 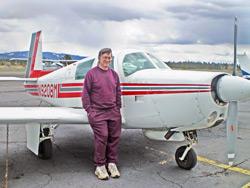 There were no world records, no acclaim except for that of 50 of his friends, just a long-held dream. On April 29 Jonathan Paul flew his 1966 Mooney from San Diego to Savannah, Ga., nonstop in less than 13 hours.

It wasn’t a record attempt, just something Paul had long wanted to do, so he took aim at the East Coast with his Garmin 430. “I’ve always admired the long distance flyer. It was a personal venture,” Paul said. He waited from January to April for the right winds that at one time boosted his 115 knots true airspeed to a groundspeed of 213 kts. It took only 74 gallons from his factory-installed 90-gallon long-range tanks. Average tailwinds, especially over the West, were 65 to 75 kts. The trip took 12 hours and 55 minutes.

Paul has just retired from his job as a software developer for air traffic management applications. He said it took two tries before he found the right winds to make the flight. If you are wondering how he handled personal comfort matters, he took along a “large jug.” His only food was a sandwich he bought the night before. His reward was a two-day visit to Savannah.

He asked controllers for a block of airspace from 13,000 to 15,000 feet, a necessary move given the strength of mountain waves in the West, and surfed the way to his personal goal. (It took him 174 gallons to get back to his home in California against those same winds.) His aircraft first flew at the factory the same day he got his pilot certificate in 1966. He said the trip cost about $2,000.