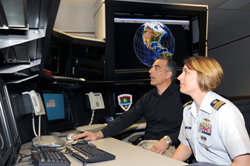 A newly commissioned search-and-rescue ground station at NASA’s Goddard Space Flight Center near Washington, D.C., takes advantage of search-and-rescue repeaters on GPS satellites. It’s the only one of its kind in the world.

The repeaters are on only a few satellites at the moment. It will take at least until 2017 to equip all new generation GPS satellites. The ground station is capable of receiving instantaneous bursts of data, relayed by the satellite, including the GPS location. It provides search capability for ships, aircraft, and hikers.

Just like the lottery, you must play to win. If you want to take advantage of the latest search-and-rescue system, you must have a 406-MHz ELT. (The FAA does not currently require aircraft to be equipped with 406-MHz ELTs.) In order for searchers to call the right location to begin their detective work, the unit must be registered with the government. And if you want your exact GPS location sent automatically, you need to have a 406-MHz locator that can be connected, and then have an avionics technician actually hook it up.

There are 275,000 406-MHz locators in the government database, but only 45,000 are registered. Officials from several agencies giving a joint press conference from the Goddard Space Flight Center this week said pilots flying over water may want to have a handheld 406-MHz locator as well as the one required for their aircraft. If a pilot is floating in a raft, the raft may be miles from where the airplane ELT was when it transmitted the location.

The new system at Goddard is called Distress Alerting Satellite System (DASS) and will be fully functional when all new-generation GPS satellites have repeaters aboard in the next seven to 10 years. It is estimated that when completed, four or more satellites will hear and repeat the same distress signal.

Software then takes over, creating a three-dimensional map of location and terrain. A fly-by map shows rescuers what they can expect to see in the way of terrain when approaching the site. Weather can be added as well.

Lt. Col. Charles Tomko, commander of the Air Force Rescue Coordination Center, said the 406-MHz system worked perfectly in the crash of a Coast Guard helicopter. It was registered, allowing searchers to check with the unit headquarters operating it, and it broadcast exact GPS information. Rescuers found the crew within hours before they would have been forced to spend a winter night in the mountains of the western United States.

Capt. David McBride, chief of the Office of Search and Rescue, U.S. Coast Guard, said too often people put their trust in a radio or cell phone, only to find they do not work in extreme or remote conditions.