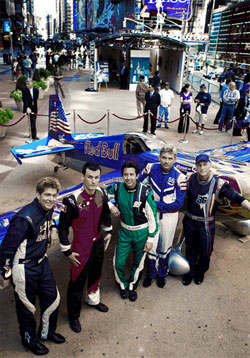 General aviation was once again in the spotlight in New York City, but this time the attention was positive. Red Bull Air Race pilots and aircraft traded their high-speed acts for some ground time May 25, setting up an exhibit in the heart of the city—Times Square.

New Yorkers and tourists had the opportunity to see a Red Bull Air Race aircraft up close and personal, talk to some of the pilots, and receive autographs. Spectators also experienced an interactive exhibit, “channel through time.”

The exhibit was staged to hype the upcoming race in the metro area June 19 and 20 over the Hudson River and Liberty State Park, but its impact could have a much broader reach, just like the races.

The high-profile, adrenaline-pumping air races introduce millions of spectators around the world to some of the adventures of GA. According to Red Bull Air Race officials, the races were broadcast in more than 87 countries to more than 300 million viewers last year. The economic impact for these two-day events is impressive as well, as they can draw up to 3.5 million spectators to the race locations.

“Red Bull Air Race has brought over $10 million of economic impact in other host cities,” Jersey City Mayor Jerramiah T. Healy announced in a press release May 25. “We look forward to a similar economic impact in the metro area.”

Despite the economic benefits of hosting the race in the New York City area, gaining permission to race in some of the most sensitive airspace in the United States wasn’t easy.

“We’ve spent two years in coordination and counsel with over 16 government and regulatory agencies to make this happen,” said Jimmy DiMatteo, race director for the Red Bull Air Race. “It would not have been possible without their support.”

New York will be the fifth of eight races scheduled for this year. During the race, pilots fly the Edge 540 or the MXS-R at speeds of 230 mph between inflatable pylons just 33 to 43 feet apart, pulling up to 12 Gs.