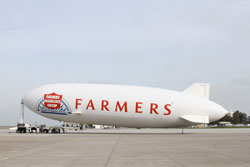 Dexter flew the airship along the California Coast and Central Valley from Moffet Field to Brown Field, beating the previous distance record, set by a Russian team, by 70.2 miles.

“I’m lucky enough to get to fly Eureka, so I know what she can do,” Dexter announced in a press release in advance of the flight.