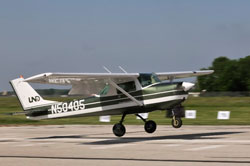 A University of North Dakota student flares one of the school’s Cessna 150s during Safecon’s short-field landing competition.

The University of North Dakota (UND) Flying Team won the National Intercollegiate Flying Association’s 2010 Safety and Flight Evaluation Conference, better known as Safecon. The win marked UND’s sixteenth national Safecon championship in the 25 years that the university has participated in the annual competition. Jim Higgins, coach of the UND flight team, was recognized as Coach of the Year.

Colleges earn points toward the top award for each student who places in a Safecon event. Flying contests include a navigation event, power-off landings, and short-field landings; ground events include written tests on aircraft recognition, cross-country flight planning, and flight computer accuracy; an aircraft preflight inspection competition; and IFR flight using a simulator.

Indiana State University hosted the weeklong competition, which concluded May 22, at Terre Haute International Airport-Hulman Field in Terre Haute, Ind. About 450 students, representing 28 aviation colleges and universities from across the country, participated, said Corey Hill, president of Safecon 2010 and an Indiana State student.

“For sure, our winning the national championship is an unequivocal testament to the character of UND’s overall aviation program,” said Higgins, an associate professor, UND alumni, and a former captain of the UND Flying Team. “This was a complete team effort—by team I mean the entire organization, firing on all cylinders. This was a very hard-working group with a strong sense of UND pride.” Students Kyle Schurb and Greg Weseman were the team’s co-captains. 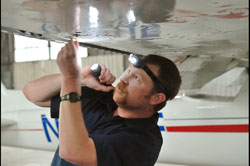 Jamie Marshall, a junior at UND, competes in the aircraft preflight contest at Safecon.

“This win clearly demonstrates UND’s dominance in the field of academic aviation at every level,” said UND President Robert O. Kelley. “We’re very proud of these students and their ability to demonstrate their aviation skills in Safecon’s rigorous national competition.”

“This competition, which is like an NCAA championship in collegiate sports, benchmarks the overall excellence of our college’s academic program and flight operations,” said Bruce Smith, dean of the UND John D. Odegard School of Aerospace Sciences, an aviator, and a former UND football player. “The UND Flying Team showcases the very high level of flying skills that we endeavor to develop.”

For the competition, the team flew three of the school’s brand-new Cessna 172 Skyhawks and two Cessna 150s, one of which was the Odegard School’s very first training aircraft. This Cessna 150 was recently repurchased and fully restored. Flight teams favor older Cessna 150s for Safecon landing events because they have 40 degrees of flaps, 10 degrees more than most newer trainers. Team members flew the Cessnas to Terre Haute, a trip that took about eight flight hours.

About 70 schools are members of NIFA, but only about 30 qualify for the national competition, which is based on regional wins. Complete Safecon results are available online. For more information on NIFA, see the website.