Get the app Get the app
Already a member? Please login below for an enhanced experience. Not a member? Join today
News & Media Garmin unit approved for helicopters 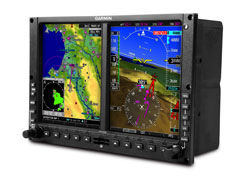 The FAA has granted a supplemental type certificate for Garmin’s G500H, an all-glass avionics system designed specifically for the VFR Part 27 helicopter market. The STC is for the Bell 206-series and Bell 407 helicopters.

The G500H is optimized for the rotorcraft market and builds on the G600 and G500, which are for the fixed-wing aircraft market. It offers SafeTaxi airport diagrams, optional helicopter synthetic vision technology, optional XM WX Satellite Weather with NEXRAD, and the option to display video from a forward looking infrared (FLIR) camera or other video sources.

It is available in two versions—one with the primary flight display on the right, the other version with the PFD on the left. The G500H communicates and integrates with Garmin’s other panel mount products, such as the GNS 430W/530W series.