Get the app Get the app
AOPA will be closed July 4th, in observance of the Independence Day holiday. We will reopen at 8:30 am ET on Tuesday, July 5.
News & Media A pioneer passes

It’s safe to say that general aviation would not have thrived to the extent it has without the efforts of AOPA’s John L. Baker. Baker, who served as AOPA president from 1977 through 1990, faced down numerous threats to GA in his 13 years at the helm. His successes established a more aggressively activist tradition for AOPA—a tradition that benefited all GA pilots, whether they belonged to AOPA or not. Baker, 81, succumbed to kidney failure at his home in Angier, North Carolina, March 11, 2010.

Baker’s remarkable career began with a childhood in O’Neill, Nebraska. His pilot-father no doubt influenced Baker’s future path, which began with service in the U.S. Air Force as a fighter pilot. He served in the Korean War in the 51st Fighter Group—a unit that suffered the deaths of all but two of its original members. He earned the Distinguished Flying Cross, the Air Medal with six oak leaf clusters, and sustained chronic back injuries as a result of ejecting from a crippled fighter. After the war, he served as a gunnery instructor at Nellis Air Force Base.

After the Air Force, Baker returned to Nebraska and earned a law degree at Creighton University, then began his long career in Washington, D.C. He began as a trial attorney for the Civil Division of the U.S. Department of Justice, and then served as a legislative aide on the staff of Sen. Roman Hruska (R-Neb.). A stint as a lobbyist for Grumman Aircraft Engineering Corporation followed that, and then Baker was named deputy director of the U.S. Department of Transportation. Subsequent jobs saw Baker working as assistant administrator of the FAA’s Office of General Aviation Affairs, and as executive director of the Air Line Pilots Association (ALPA).

So by the time Baker joined AOPA—first as a senior vice president, followed by his selection as president in May 1977—his skill set as a Washington insider poised him perfectly to head up the association’s advocacy efforts. His predecessor, Joseph B. (Doc) Hartranft Jr., had done a masterful job of building AOPA’s infrastructure, defining its public voice, and elevating its roster to the 167,000-member mark. Baker took this foundation several steps further, making AOPA several orders of magnitude more effective and influential.

One of his first initiatives involved establishing AOPA’s legislative affairs department, complete with a staff located in offices near Capitol Hill. It wouldn’t be long before this staff was put to the test.

At the FAA, Baker had championed measures to prevent what he called “the one thing that general aviation cannot afford—a catastrophic midair collision.” That nightmare came true on September 25, 1978, when a Pacific Southwest Airlines Boeing 727 collided with a Cessna 172 near San Diego, killing all aboard both airplanes and several on the ground. Immediately, ever-escalating demands began urging the exclusion of GA from the then-newly established Terminal Control Areas (today’s Class B airspace). The FAA and NTSB, responding to ill-informed press reports, wanted more air traffic control over more airspace. At one point, there were proposals to lower positive control airspace to 10,000 feet msl. In the end, Baker and AOPA prevailed. The final NTSB determination of probable cause found that the 727 essentially ran down the 172, whose pilot was following all the regulations. TCA airspace, instead of being changed to exclude GA, would be redesigned for easier transit, arrival, and departure by GA aircraft.

Soon after this crisis, Baker created AOPA’s Political Action Committee (AOPA PAC). The PAC proved its worth in the coming lobbying campaigns to elect representatives and senators sympathetic to GA concerns. Baker established AOPA’s Communications Division, which centralized AOPA’s media and public relations educational campaigns. In 1986, another midair collision—between an Aeromexico DC–9 and a Piper Archer, within the Los Angeles TCA—brought a resurgence of demands to deprive GA access to high-density airspace.

Through Baker’s testimony and speeches, and with the help of the new Communications Division, GA’s case was taken public. As a result, the outcries were more subdued than those surrounding the San Diego midair—mainly because AOPA was able to argue that TCA airspace had become so complex that even the most diligent pilots had trouble navigating it. This time the NTSB’s final ruling focused on an airspace system so complex that even qualified pilots flying properly equipped airplanes had no guarantee of avoiding all the potential pitfalls. After this, GA was viewed less and less as a reckless activity that automatically warranted the implementation of strict controls. It was a big win, for Baker, AOPA, and all of general aviation.

Long before the public became aware of the adverse effects of unrestrained, multimillion-dollar product liability judgments, Baker spoke out on the problem—which by the mid-1980s saw the manufacture of new airplanes drop to sub-1,000-unit totals. This was down from a high of nearly 18,000 new airplanes a year built in the 1970s. Baker and AOPA’s lobbying staff spent many days making members of Congress aware of product liability issues—setting the stage for an eventual resolution.

There were other landmark initiatives. One was the ongoing effort to make sure that the $4-billion-plus surplus in the Aviation Trust Fund was fairly distributed to more than 3,000 GA airports. Before Baker’s presidency, it was common practice to divert trust fund money to projects unrelated to GA. This was one of many ways that Baker sought to limit ill-advised spending and wasteful programs.

Baker identified the feasibility of creating a satellite-based navigation system—one that didn’t rely on ground-based navaids. Long before GPS navigation was explored by the civil sector, Baker sought experts such as Princeton’s Gerard O’Neill to advance the satellite cause. Because of this, O’Neill’s seminal theories on the subject were published in an article that appeared in the September 1983 issue of AOPA Pilot. Dubbed “Geostar,” this concept was one more illustration of how Baker could lock onto issues long before they became issues, and to see the forest for the trees. 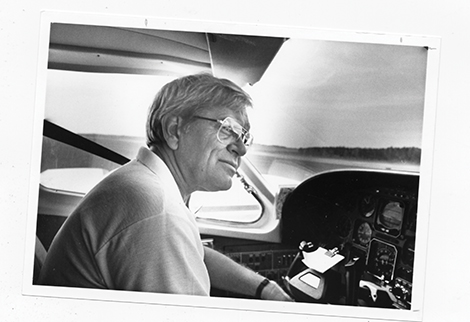 In late 1989, AOPA’s growing influence and widening member services caused membership ranks to swell to the 300,000 mark. Under Baker’s leadership, AOPA’s numbers nearly doubled from the time he took over as president.

Baker’s successor, Phil Boyer, said of him, “He was a highly qualified leader who transformed AOPA from a large flying club to one of the world’s most successful membership organizations. His concentration on member-centric activities was as precise as his military flying.”

AOPA President Craig Fuller said, “John Baker was an extraordinary advocate for our freedom to fly, and his passion for defending the interests of the general aviation community never waned. His work has a lasting impact on our industry, and it was my good fortune to get to know John after I came to work in Washington, D.C., in 1981. From the time I served in the White House right up to today, I have valued his counsel.”

John L. Baker is difficult to summarize in a single phrase. He flew fighters, but at heart saw himself as a Piper J–3 Cub driver, and liked to build remote-controlled model aircraft. He was very much at home addressing opponents and speaking in public, but was secretly introverted, and had a sentimental streak. Those around AOPA’s offices who knew him recall his many humorous asides, but he was never kidding when it came to GA’s rights. As he said upon taking office at AOPA, “I have some pretty firm ideas about this business of general aviation being treated as a second-class citizen. It has got to come to a screeching halt.”

Baker was one of a kind, and general aviation is the better for it.