Get the app Get the app
Get the latest news on coronavirus impacts on general aviation, including what AOPA is doing to protect GA, event cancellations, advice for pilots to protect themselves, and more. Read More
Already a member? Please login below for an enhanced experience. Not a member? Join today
News & Media Pilots: Chuck Doyle Jr. 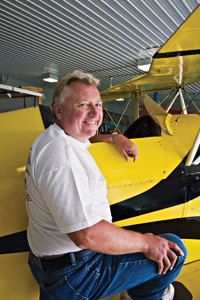 It’s a beautiful morning at Sky Harbor Residential Airpark in rural Minnesota. Crickets are chirping, the air is crisp and still—and Chuck Doyle is missing. In his hangar the coffee’s still hot, the lights are on, and it’s obvious that Doyle has been here. But where is he now?

Then the roar of a radial engine breaks the stillness, and a red-and-black Waco UBF-2 flies overhead. Doyle isn’t missing. He’s out flying, sharing his love of aviation with someone who stopped by that morning to say hello.

Doyle welcomes you into his hangar and you take in the sight—the 80-by-100-foot hangar has an in-floor heating system and a shop equipped with enough tools and machines to restore an airplane or build one from scratch. But best of all, the hangar is packed with airplanes. From the tiny Pietenpol to the huge 1953 Beech 18, Doyle has nine airplanes in his collection and a couple of projects under way.

Doyle grew up on a grass strip in Apple Valley, Minnesota, where his father, local aviation legend Chuck Doyle Sr., taught the younger Doyle to fly at an early age. He started collecting as a teenager when he paid $1,500 for a beat-up Piper Cub. He fixed the Cub, sold it, and purchased his next airplane. Each airplane took him a step closer to owning the airplanes of his dreams: open-cockpit biplanes from the 1920s and 1930s.

Does he have a favorite airplane in his collection? “They’re all favorites!” he laughs, then admits that his 1932 Waco UBF-2 is high on his list and he is most sentimentally attached to his late father’s 1941 Stearman, which has a 450-horsepower engine. And although he loves his open-cockpit antiques, Doyle recently acquired a brand-new airplane, a 2008 American Champion Super Decathlon, so he can fly in comfort during the cold Minnesota winters.

With an enviable collection of airplanes and a lovely airpark home, Doyle appears to have it all. Yet, he’s worked hard to get where he is, and he’s had tough breaks along the way. One was when Doyle was furloughed from the airlines after the terrorist attacks of September 11, 2001; later, he was diagnosed with cancer. Now he’s back to work, cancer-free, enjoying life, and helping others enjoy theirs.

“I’m lucky to be a survivor, lucky to have the job that I love to do, and lucky to have the friends that I have.” Doyle gestures toward the bulletin board as he walks to the door, ready to call it a day. “Those are pictures friends have sent me of themselves with their airplanes.” Doyle smiles as he shuts off the lights. And although he owns a hangar full of beautiful airplanes, you have a hunch that it’s the friendships Doyle has collected that he cherishes most.