Get the app Get the app
AOPA will be closed July 4th, in observance of the Independence Day holiday. We will reopen at 8:30 am ET on Tuesday, July 5.
News & Media Answers for Pilots: Aircraft theft insurance 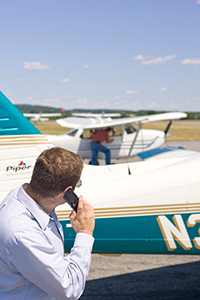 Imagine your shock if you walked into your hangar to preflight your aircraft and saw that it was empty. Your airplane was missing. You would be stunned as you slowly realized your vanished airplane may have been stolen. After you had called the authorities and some of the initial confusion had settled down, you would want to be assured that your aircraft insurance policy covered theft. That was the initial reaction of three of the pilots whose aircraft were allegedly stolen by Colton Harris-Moore, widely known as “the barefoot bandit.”

We wanted to dig into the insurance issues that would likely concern a theft victim, so we contacted Janet Bressler, president of AOPA Insurance Agency (AOPAIA). When asked whether most aircraft insurance policies cover theft she was quick to assure us that, yes, they do. She went on to discuss terms of coverage, saying that although each loss is unique and specific policy terms can vary between insurance companies, policy coverage of theft is typically straightforward.  Bressler stated, “If an aircraft owner is brought into a lawsuit arising from the theft of their aircraft, their insurance policy will serve to defend their interests and address any judgment awarded against them within the scope of policy coverage.” So, if your aircraft was stolen, and the court decided you were legally liable for all or part of the loss, the insurance company would pay up to the amount of coverage stated in your policy.

We wondered how an aircraft theft scenario would play out if the aircraft was recovered, but had been damaged. According to Bressler, that claim would be handled similarly to other damage loss, in the sense that a claims adjuster would determine the extent of the loss—whether it’s partial or total—in relation to the hull value coverage purchased under your policy.

We had a couple of questions about that: If it’s a total loss, can the owner keep the salvage? The answer is, possibly. The aircraft owner is not entitled to the salvage, but may participate in the bidding process. “An aircraft owner does not have first right of refusal of the salvage,” Bressler explained. “The owner should notify the claims adjuster and the insurance broker that he wants to purchase the salvage.” It’s worth doing the math to weigh the salvage purchase price against the income you might make selling the parts.

Here’s another scenario: What if the claim came back as a partial loss, but the owner wanted a total loss—is there a possibility of reaching a compromise settlement?  “In general, most insurance companies are willing to consider an owner’s differing position on valuation when factually supported,” Bressler shared. She pointed out a related concern—that under-insuring an aircraft could result in a total loss settlement that only partially covers the value of the aircraft. The owner in that situation would be responsible for any balance on the aircraft loan. An aircraft owner is in a much better position to negotiate with the insurer when the insurance policy fully covers the value of the aircraft.

And, finally, we asked what happens if the aircraft is never found. What is the waiting period and how is the loss handled? According to Bressler, most policies have a provision allowing a 60-day recovery period, after which the claim will be paid as a total loss.

All in all, it’s a sad situation to contemplate. Although aircraft thefts are rare, you can further reduce the odds of becoming a target by improving the security of both your hangar and your aircraft. Lock the aircraft itself—even if it’s kept in a locked hangar—and take the key with you. You might reinforce locks on hangar doors if they are flimsy, and put a lock on the prop, throttle, mixture, and/or wheels. Pay attention to strangers lingering at the airport who seem to have no airport business. In response to security concerns, AOPA, in partnership with the Transportation Security Administration (TSA), has developed a national Airport Watch program, which works like Neighborhood Watch. Pilots who spot suspicious activity can report it to the authorities by calling 866/GA-SECURE (866/427-3287).