Get the app Get the app
News & Media Epic Flights: Coastal Maine in Autumn

A lap around Acadia National Park in an open-cockpit biplane

Click the image above to view a slideshow. The scenery is astonishing as soon as you take off from coastal Maine’s Hancock County-Bar Harbor Airport—and it only gets better during an evening circumnavigation of Mount Desert Island. 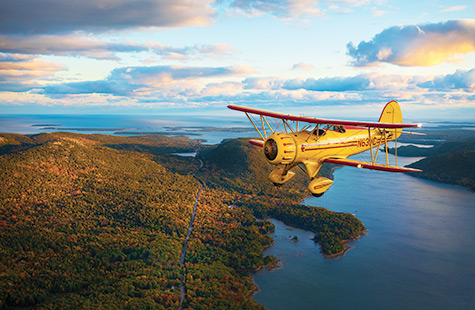 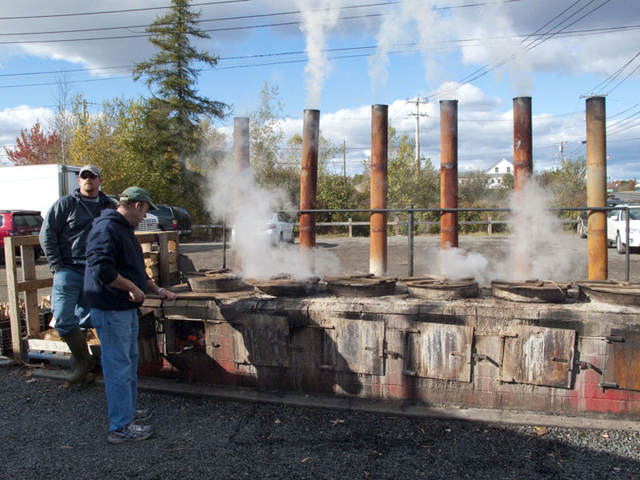 The scenery is astonishing as soon as you take off from coastal Maine’s Hancock County-Bar Harbor Airport—and it only gets better during an evening circumnavigation of Mount Desert Island.

It’s late October, a few weeks past peak autumn color season in this rugged and picturesque corner of America. The air temperature is falling and, in a few hours, it will drop below freezing. The open-cockpit Waco biplane I’m flying is owned by Acadia Air Tours, and it has only a few days left in Maine before it begins its winter migration to a warmer climate and off-season maintenance.

Mike Allen, a wry, coppery-skinned, down-east Mainer, leads our photo flight from the left seat of a Cessna 182 that spends summers towing gliders here for the same aerial sightseeing firm. With the right door removed to give AOPA photographer Chris Rose an unobstructed view of our incomparable surroundings, our drafty flight of two airplanes turns east, away from the airport and over the rocky coast and the churning whitecaps of Eastern Bay. 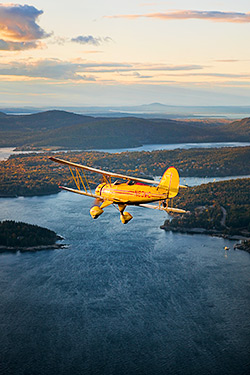 “That’s Cadillac Mountain to our right,” Allen says of the towering chunk of granite—the central feature of Acadia National Park—that reaches 1,530 feet from the ocean’s surface to its windswept peak. The mountain’s flanks are blanketed in flaming yellow, red, and orange. Thousands of trees on the mountainsides had managed to hold onto their brilliant leaves until a stiff north wind and rain blew through two days ago. Now they’re a colorful carpet.

“You should make it a point to walk to the top of Cadillac before you leave,” Allen advises. “Some people drive, others ride bikes, but I think you’ll prefer walking, as I do.”

We fly side by side over the widening expanse of Frenchman Bay, climb to 2,500 feet msl, and remain about a half-mile off the coast as we loosely parallel the shoreline’s jagged contours. Acadia National Park, a long-ago gift from the Rockefeller family to the citizens of the United States, covers about 80 percent of Mount Desert Island, and FAA rules and common courtesy dictate that pilots keep their aircraft at least 2,000 feet agl over the unspoiled natural area. Allen reduces the propeller rpm on the 182 to cut the noise level, and the Waco’s wooden fixed-pitch prop turns a leisurely 1,900 rpm. At this height, the air on the lee side of the mountain becomes smooth, and it’s easy to see beyond Cadillac Mountain and appreciate the circular shape of the majestic island. 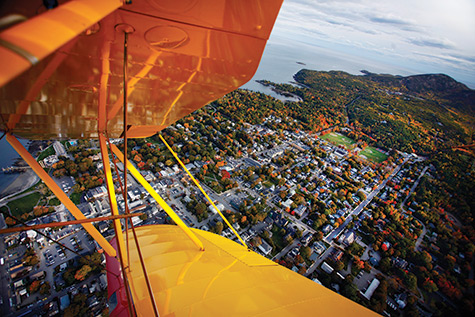 Stately white-painted homes dot the shoreline at water’s edge, and the town of Bar Harbor slides by underneath. The last of the cruise ships plying the Maine coast is about to depart for the season. Alongside, a menagerie of vessels ranging from tiny, low-sided lobster boats to exotic, tall-masted schooners fills the harbor. Most of the hotels are clearing out for the season, and only a skeleton staff is left. In two weeks, most of them will be closed, the seasonal workers long gone, and the recently bustling tourist town will slip into winter hibernation. 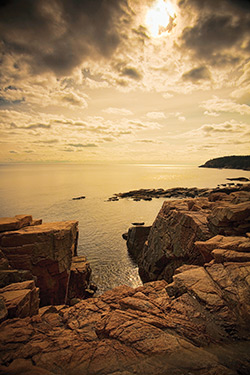 Nature’s beauty takes hold on the extreme eastern edge of the island with a breathtaking view of “The Precipice,” a towering, tree-covered area of sheer rock cliffs. Allen points out a hiking trail that snakes along the ridge.

“It’s not for the faint of heart,” he says with typical understatement.

A lighthouse marks a tiny, rocky island in the Petit Manan wildlife refuge off the coast in the turbulent waters where Frenchman Bay meets the Gulf of Maine. The lonely looking outpost is a breeding ground for puffins, and the rare and cartoonish seabirds make it their favored home. Allen keeps a respectful distance and warns that federal fish and game officials are quick to fine pilots who fly too close. (The wildlife sanctuary is marked on the Halifax Sectional, but it’s small and easy to miss.)

The tony town of Seal Harbor, summer home of Martha Stewart, appears at the southern end of the Mount Desert Island, and very near to the distinctive Bear Island Lighthouse. We circle offshore, then climb to 3,500 feet. Two pristine bodies of fresh water, Eagle Lake and Jordan Pond, are clearly visible on the west side of Cadillac Mountain, shimmering in the golden evening light. 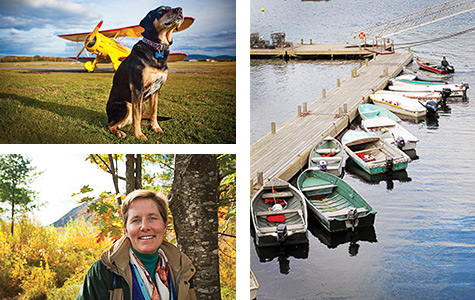 Somes Sound, a narrow north-south canyon in the middle of the island, is the only fjord on the East Coast, its steep rock walls carved out by glaciers. The outgoing tide pulls what looks like a river of rushing seawater from the sound and out into the gulf. Long shadows cover a few kayakers still paddling on the water, but our airplanes are still bathed in sunlight as we fly north along the western side of the narrow sound.

Soon, we begin a long descent across the north end of the island and head back to the airport as the sun dips below the horizon. Twinkling lights are all that can be seen of Somesville, the historic first settlement here. Lower altitude and increasing speed make the relatively narrow Eastern Bay pass by in a blur, and moments later we’re entering the left downwind traffic pattern for Runway 22 at BHB. 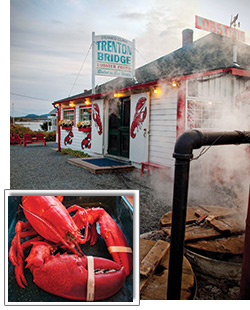 Runway 22 is preferred for VFR takeoffs and landings when winds are five knots or less, and that’s the case tonight as the surface breeze has slackened during our hour-long flight. I swing wide over the shoreline to follow Allen and Rose in the Cessna. My face and hands have become almost numb from the cold wind and icy slipstream, and my radio transmissions are incomprehensible mumbles. Yet I’m reluctant to let this magical flight end.

The 5,200-foot Runway 4/22 is long enough to accommodate business jets, and they’re frequent visitors here during color season, along with turboprops operated by regional airlines and a variety of piston general aviation aircraft. Gliders land in the grass on the west side of Runway 4/22, and they fly regularly throughout the summer and fall. The airport’s crosswind Runway 17/35 is 3,253 feet long and has a slight downhill grade heading south toward the water that seems steeper than the 1-degree slope pointed out in the Airport/Facility Directory. This runway is little used during the summer, when the winds tend to favor Runway 22, but pilots are glad to have access to it in the spring and fall when the winds vary widely in direction and sometimes blow sharply from the north.

Columbia Air Service is a full-service FBO and offers plentiful tiedowns and a courtesy car. The airport is a regular stop for Island Express buses that provide quick and easy ground transportation throughout Mount Desert Island. There’s no place on the airport for fly-in visitors to buy live Maine lobsters to take with them—but two “lobster pounds” are close by (a long walk or short drive), and provide lobsters and fresh seafood to eat in or carry out. 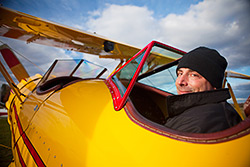 The sun has long since set and the moon is starting to rise by the time we get our airplanes shut down, refueled, and pushed into their hangar on this frosty evening. My gloved hands tingle as the numbness starts to wear off, and I’m exhilarated by the overwhelming sensory feast just ended. The bracing air, dramatic ocean, favorite airplane, teamwork, and wondrous natural beauty made this aerial lap around Acadia simply unforgettable.