Everything but the pilot

The U.S. Customs and Border Protection's Office of Air and Marine operates a fleet of about 290 aircraft. In addition to six Predator B remotely piloted aircraft, one of which was converted to the Guardian maritime variant, manned aircraft range in size from the Cessna 172/182 to the Lockheed P-3 Orion long-range patrol aircraft.

Bombardier DHC-8 twin turboprops are being used for medium-range patrol missions; the fleet also includes Cessna 206 and 210, Pilatus PC-12, and Piper PA-42 Cheyenne aircraft. Five King Air 350 Multirole Enforcement Aircraft are on order, with the first scheduled for delivery in early 2011. These will be among the most sophisticated surveillance, tracking, and air interdiction platforms used by the Department of Homeland Security.

On the rotary-wing side, 50 AS-350 A-Star helicopters are in service or on order. Sixteen UH-60A Black Hawks are being upgrades, and CBP's first Huey II helicopter—overhauled and significantly upgraded—has been delivered; the program is expected to provide a full service life for about half the cost of a new aircraft. —MPC 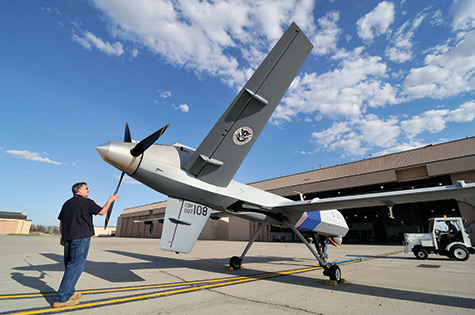 To any pilots flying in that sector, situated along the Canadian border north of Grand Forks, North Dakota, it sounds like a routine request—perhaps by an aircraft doing mapping or aerial photography. And that’s exactly what it is.

But there’s a twist—the aircraft is a Predator B unmanned aerial system (UAS), and the pilots are seated in a ground-bound control station 100 miles away.

This morning its pilot is John Priddy, director of U.S. Customs and Border Protection’s National Air Security Operations Center at Grand Forks. It could as easily be one of the 11 UAS pilots working for him. CBP opened its second Predator operation at Grand Forks Air Force Base in February 2009; the first is in Sierra Vista, Arizona, and the newest just began operating in Corpus Christie, Texas, in September.

While the Predator’s not manned, it’s very much a piloted aircraft; remotely piloted aircraft is a more accurate description. Pilots use high-resolution cameras, including one on a swiveling sensor ball, to watch for traffic, in addition to completing surveillance missions. When Center calls traffic, they can acquire it as far as 20 or 30 miles away—and can tell what color cap its pilot is wearing. After landing the crew uses the Predator’s cameras to taxi, and the ground crew marshals it to parking using standard hand signals.

Roughly comparable in size to a Cessna Citation CJ1, the Predator B is 36 feet long, with a wingspan of 66 feet and a max gross weight of 10,000 pounds. It’s powered by the same Honeywell TPE 331-10 turboprop found on the Cessna Conquest II and other GA aircraft. According to manufacturer General Atomics, it can fly as high as 50,000 feet, has an endurance of more than 30 hours, and can fly as fast as 240 knots.

Integration of unmanned aircraft into the national airspace system continues to be a challenge. AOPA’s position is that UAS operation in the NAS should not have a negative impact on GA or other existing operations, and should not require segregated or restricted airspace. In addition to the establishment of a temporary flight restriction, CBP’s Grand Forks operations follow a certificate of authorization (COA) issued by the FAA that establishes flight requirements. The COA spells out dimensions of the airspace, altitudes, and procedures.

Predator flights are flown on IFR flight plans. The aircraft take off VFR, with minimums of 3,000 feet and five miles visibility, in the Grand Forks Air Force Base Class D airspace. The crew maintains a visual lookout, scanning for traffic with the Predator’s video cameras, and observers on the ground watch for other aircraft—especially those that might not show up on radar. It climbs to 18,000 feet in a TFR, where it enters Class A airspace and behaves like any other IFR flight.

CBP sees the need to fit into the national airspace system, and worked with the FAA to explore options. “We operate under a national security TFR, so there has to be a security reason to stand up the TFR,” Priddy said. “It was a question of what airspace models worked to mitigate the traffic, and yet preserve the airspace for all users.” An objective was to minimize the impact on the rest of the aviation community, he said.

The TFR remains active as long as the Predator is flying, in case the aircraft needs to make an emergency landing. “We try not to hog the airspace if we don’t need it,” said Jim Elton, deputy director of the Grand Forks operation.

The Predator can be controlled by either line-of-sight radio signals or through a satellite link. Line of sight works up to 150 nm from the Grand Forks base; the satellite link has no distance restrictions. Both datalinks are active in normal operations; data from the aircraft’s synthetic-aperture radar and communications with Minneapolis Center always go through the satellite link. Because it must be landed using the line-of-sight system, “we have no alternate airport with this airplane,” Priddy explained. If both datalinks fail, the airplane flies a preprogrammed emergency route; if control cannot be restored, it will orbit over an uninhabited military reservation until it eventually runs out of fuel and crashes.

Remote piloting offers some advantages over manned missions. “We don’t have lost comms on this airplane because we have a telephone,” he said. If communication is lost, the pilot can call and advise ATC. The satellite link allows control of the aircraft in flight to be handed off to another facility. 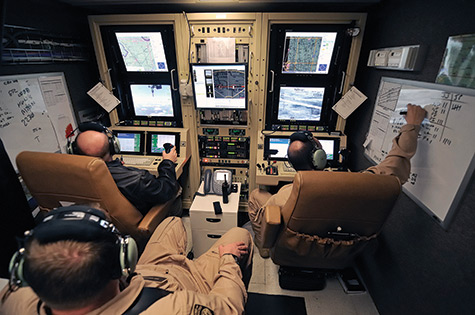 The current COA for Grand Forks keeps missions within 150 miles of a ground-control station, but Priddy said an expansion of that authority is expected soon. Emergency COAs allow temporary expansions; one, in February 2010, allowed CBP Predators to fly over all of North Dakota, helping the state emergency operations center and Federal Emergency Management Agency respond to widespread flooding.

Typical missions involve monitoring the borders, as well as surveillance for drugs and illegal immigration—often in coordination with other law-enforcement agencies. Here’ the Predator’s ground-surveillance radar can come into play. “This synthetic aperture radar can show changes—tire tracks, fences down, footprints,” Priddy explained.

This year, CBP is focusing additional attention on the southwestern U.S. border. While its UAS operating from Sierra Vista covers the Arizona and western Texas borders, a new COA approved earlier this year allows operations from Corpus Christie and a new CBP unit has begun operations there. The facility ribbon cutting was September 8.

Grand Forks is training those pilots, Priddy said. “You can’t buy a Predator pilot.” There are about 70 civilian Predator pilots, he said, with CBP providing about two dozen in the past year. Priddy’s team also has trained three Coast Guard pilots, and has more in training.

“You have to make a lot of shifts in thinking when you operate this airplane,” Priddy said. Preflight of the Predator includes a conventional walkaround inspection. Crew in the ground control station use familiar bound checklists, and the pilot picks up the Grand Forks Air Force Base ATIS through the comm radios.

“Everybody that flies or controls is an FAA-rated, current pilot,” Elton explained. Currently, a valid airman medical certificate also is required. CBP is developing its own currency standards, but they’ll always be FAA-compliant. “It’s tough to keep guys current,” he noted. They’re also CBP agents, and come in as certificated pilots from the military or GA.

Pilots sit at a console, looking at monitors with military-standard head-up display symbology. The Predator typically loiters at 105 knots, with its Honeywell turboprop burning about 167 pounds of fuel per hour.

“It’s definitely different,” said Alex Hill, an air interdiction agent and pilot for CBP. “Even the basic scan is different. A lot of what you do is head down, typing on a keyboard and using a mouse.” There’s no seat-of-the-pants sensations, or engine sound confirming power changes, he said. “When you don’t have them, you notice.”

The ground-control station offers a conventional-looking joystick, throttle, and rudder pedals, but there’s no control-pressure feedback. “The way you trim the aircraft is a little different. You trim to a pitch attitude, not an airspeed.” The autopilot is controlled with the keyboard and mouse.

Hill said flying UAS has benefits, however. “If you’re up on a 10-hour mission, you can call a replacement pilot in—go get a workout and have lunch—and come back.” You can pick up the phone and call the operations center for weather and notam updates, he added.

“You’ve got a lot more options as far as your resources go. And it’s neat to have the [electro-optical infrared] ball to inspect your wings for ice, or your gear. It’s an extra set of eyes.”

Still, he said it was a challenge to integrate stick-and-rudder skills. “Having thousands of hours in normal aircraft is great,” said the former naval aviator and instructor pilot, “but with this, it’s sort of like starting over. Most pilots say landing it is more difficult than any other platforms they’ve flown. And I can understand that, looking through a soda straw and without the sensations you’re used to.” The sensor operator, sitting next to the pilot, helps with clearing turns and other tasks.

One floor up from the ground-control station, the flight’s progress is monitored on large TV displays in the Predator Operations Center. There, the command duty officer and operational duty officer essentially function as additional crewmembers. One screen shows the pilot’s flight display; others show imagery from the sensor ball and a Google Earth display that provides geographic orientation. A smaller screen shows the forward-looking camera’s view.

“I still can’t believe there’s nobody in that thing,” Priddy commented, watching a flight from the operations center.