Get the app Get the app
AOPA Members DO more LEARN more SAVE more - Get MORE out of being a pilot - CLICK HERE
News & Media Found: AOPA&rsquo;s sweepstakes Cessna 182

Landing a good one

Whew! After a hunt lasting two months, we finally found our 2011 sweepstakes airplane. The Crossover Classic-to-be is a 1974 Cessna 182P; it lived at the Middletown, Ohio, Regional Airport (MWO) and belonged to Thomas C. Wortley, a local businessman. As a restoration project, this airplane is near perfect, with just 1,754.6 total hours on the airframe, long-range fuel tanks, a recently overhauled engine, and an original Cessna/ARC instrument panel, with two exceptions: Garmin’s GMA 340 audio panel and SL30 nav/com.

Keep up-to-date with your Sweeps plane

For the latest information, blogs, videos, and photos on the AOPA 2011 Crossover Classic’s refurbishment and travels, go online. Because of AOPA Pilot’s production schedules, the magazine’s coverage may lag the airplane’s actual progress. Video coverage of the purchase and first flight is now available for viewing on the sweepstakes website.

Whew! After a hunt lasting two months, we finally found our 2011 sweepstakes airplane. The Crossover Classic-to-be is a 1974 Cessna 182P; it lived at the Middletown, Ohio, Regional Airport (MWO) and belonged to Thomas C. Wortley, a local businessman. As a restoration project, this airplane is near perfect, with just 1,754.6 total hours on the airframe, long-range fuel tanks, a recently overhauled engine, and an original Cessna/ARC instrument panel, with two exceptions: Garmin’s GMA 340 audio panel and SL30 nav/com. The interior? A great example of 1970s garish, worn red/orange seats and festooned with Royalite—the plastic trim so emblematic of that era. The paint? As cracked and oxidized as the surface of the moon—a good example of what can happen to a lacquer-based finish after 36 years—but we don’t care; the airplane will be repainted to the highest standards.

Best of all, what little corrosion it had was of the light, surface variety—and easily corrected. That’s vital to the project, because although everything else will be replaced with modern components, the airframe will stay. And believe me, finding a corrosion-free 1970s Skylane is as close to mission impossible as you can get. 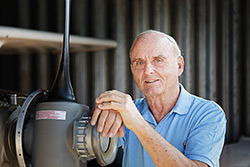 Wortley didn’t exactly set out to sell his 182. He responded to a want ad in a Cessna Pilots Association online newsletter seeking a decent 1970s Skylane. The ad was placed by Air Mod’s Dennis Wolter, who was part of my dragnet, and whose company will redesign and reupholster the Crossover Classic’s interior.

Wortley, 79, has been a pilot for 61 years, and he’s the Skylane’s second owner. Wortley and several others bought N52832 in 1979. It has been hangared ever since, and flown carefully in the 31 years the group owned it. As partner after partner passed away, Wortley found himself the sole owner. Over the past few years he flew it less and less, and claims to have flown it only 10 hours in all of 2009. At the same time, he and a partner were restoring a 1946 Piper J–3 Cub, which is very near completion.

Intellectually, Wortley knew that it was time to part ways with his beloved Skylane. But the emotional cords were tough to cut. His internal conflict was plainly evident in phone calls and visits to Middletown. Selling N52832 meant closing a chapter in his flying life—but opening another.

Even though we try hard to hide our intentions from sellers and potential sellers, someone let the cat out of the bag. Wortley knew that his airplane was on the fast track to becoming AOPA’s 2011 sweepstakes airplane. But in a way, this may have worked to our advantage. Wortley continually insisted that having his airplane go on to a good owner was a priority. “And I’d never sell it to a flying school, that’s for sure. They’d beat it up,” he said. So perhaps by knowing that his airplane would be fully restored, he eventually warmed to the idea of selling it to AOPA. 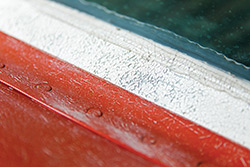 Don Sebastian, of Aviation Consulting Services Inc. in Whispering Pines, North Carolina (910-315-0099), was our prepurchase inspector, and he spent two days evaluating Wortley’s airplane. “He will find something wrong with the airplane,” a former Sebastian customer told me, and he was right. Besides being an inspector extraordinaire, Sebastian is also an ATP, a CFII, an A&P mechanic, and an expert witness.

Watching Sebastian work was an education. By the time he arrived he’d already searched the airplane’s title and checked FAA records for evidence of major damage. Besides checking NTSB records, he even Googles the N-number to see if newspapers or other sources mention an accident involving the airplane. In our case, there was no evidence of a damage history. 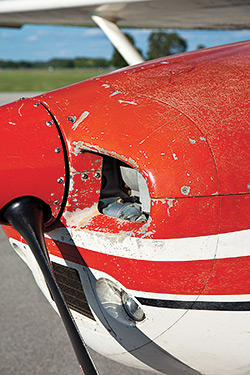 Once at the airport, Sebastian methodically checks out the entire airplane, and uses a checklist to make annotated remarks. He photographs any anomalies, spends an evening looking at the engine and airframe logbooks, and checks for evidence that airworthiness directives have been complied with. Then he took a test flight with Wortley to see if all the radios worked and how the airplane behaved.

When he was finished, Sebastian produced a document showing 35 maintenance discrepancies. These were mostly minor squawks, ranging from worn tires to fuel gauge errors, a missing exhaust clamp, and a leaking fuel tank, for example. Also noted was oilcanning of the horizontal stabilizer, a manifold pressure gauge that read an inch and a half low, and an expired pitot-static inspection, among other items. In all, the airplane was in pretty good shape for its years.

After the squawks were resolved, Wortley signed the sales contract, and N52832 was ours—although at a later date it will receive a new N-number reflecting the “Crossover Classic” theme. Later that day, senior photographer Mike Fizer took group photos of Wortley; his wife, Mary Deas; and friends—all standing around the airplane. Suddenly, the mood was lighter. The weather was perfect, and parachutists from a local skydiving outfit landed in the nearby grass. All eyes went skyward—where Fizer and I would be tomorrow—to watch them make their approaches. 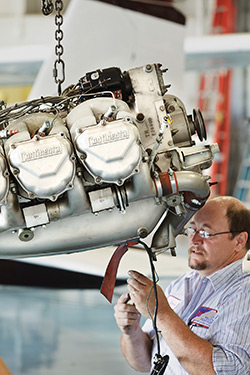 I made sure to check everything during the preflight and runup, and all seemed in order. Takeoff was uneventful, but 12 minutes into the climb the vacuum pump died. The vacuum gauge needle plunged to zero, right before my eyes! Odd, as Sebastian recorded the vacuum system was functioning properly. Oh, well, I guessed it simply chose that time to conk out—and anyway, the weather was severe clear. I covered up the attitude and heading indicators and continued the climb to 6,500 feet for our cruise to a gas stop at the Rolla National Airport (VIH) in Vichy, Missouri.

During the two hours, 45 minutes to Rolla, we trued out at 128 knots. That’s with 75-percent power and the mixture leaned to best power. It should have been a few knots faster, but full fuel and all our gear must have taken their toll. In any event, after Air Plains finishes with it, the 300-horsepower Continental could push true airspeeds as high as 160 knots, according to some who have installed the same conversion. 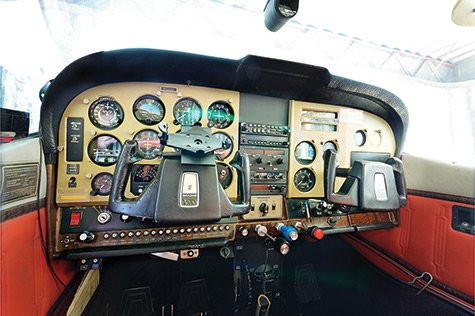 Some quirks of note included a right-wing heaviness, a number-two VOR that only seemed to work when the VOR itself was literally in sight (this was one of Sebastian’s squawks), and an autopilot that wouldn’t hold a heading or track a nav signal (also squawked by Sebastian) from the number-one VOR, which, thankfully, was the fully functional Garmin SL30 nav/com. Not to worry. This will all be replaced—save the SL30—by Garmin’s new G500 avionics, plus a Cobham/S-TEC System Fifty-Five X autopilot, and an L-3 Avionics Trilogy standby instrument gauge. 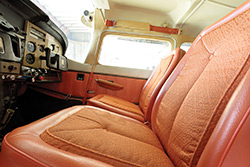 In the meantime I’ll use Garmin’s new Aera 560 handheld GPS as a principal navigation source, and stick to flying in VFR weather. The Aera 560 is a great unit that’s loaded with features and intuitive to use—and perfect for trips like these.

The leg from Rolla to Wellington (EGT) took two hours, 15 minutes. Soon, we were on the runway for an acceptable landing, then on the Air Plains ramp. Air Plains’ Mike and Carolyn Kelley, as well as Katie Clark, came out to meet us, and we all had a good look at the airplane. Then it was time to push it back into the hangar—and wait for the new engine to arrive. By the time you read this, its installation should be complete, and the converted airplane should be on its way to Long Beach for display at this year’s AOPA Summit, which runs November 11 through 13. Stay tuned for next month’s coverage of the Air Plains conversion.