Get the app Get the app
News & Media Frugal Flyer: Save some gas

Frugal Flyer: Save some gas 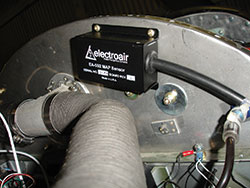 Add right magnetos to the list of soon-to-be-obsolete airplane parts. Electronic ignitions have proven time and again that they can increase the top-end performance and fuel efficiency of aircraft engines, and they’ve flown hundreds of thousands of hours in mostly Experimental-category aircraft with impressive results.

“We expect FAA approval in the fall and our first Standard-category product deliveries by the end of 2010,” said Mike Kobylick, president of the Michigan-based company. “We’ve been working hard, and we’re very, very close.”

ElectroAir recently supplied an electronic ignition virtually identical to the kind it plans to certify to Mike Regen, a Maryland-based pilot and aircraft owner, to install on his RV–4 with a normally aspirated, 160-horsepower Lycoming O-320 engine, a common engine that also powers thousands of FAA-certified airframes.

Regen documented the changes using a computerized engine monitor that measures multiple engine parameters. “I wanted to lower my fuel consumption just like everyone else,” he said. “But I was also looking for better reliability, greater efficiency, and a reduction in periodic magneto servicing that’s typically required every 500 flight hours.”

Installing the electronic ignition required removing the right magneto and mounting a timing sensor in its place, as well as adding a manifold pressure sensor, a coil box on the firewall, and a “brain box” containing circuit boards in the cockpit. ElectroAir says the entire process takes between four and six shop hours.

The rest of Regen’s single-battery, 14-volt electrical system was unchanged. The left magneto was untouched and can still power the engine in case of electrical failure. The key switch remains the same (left, right, and both) with the key in the Both position in normal flight. Regen also installed new spark plugs, REM37BYs, which have the gaps ElectroAir recommends.

Regen said his four-cylinder engine runs more smoothly with the electronic ignition, and he’s able to lean more aggressively at cruise. “I normally fly cross-country trips at about 10,000 feet,” he said, “and the engine runs smoothly at much leaner settings and reduced fuel flow than it used to. It even runs smoothly lean of peak—and that’s something that wasn’t possible before in carbureted engines.”

Lean-of-peak operations have typically been limited to fuel-injected engines with precisely matched nozzles. But the electronic ignition with its variable timing allows carbureted engines to get some of the same benefits.

I accompanied Regen on a recent flight to document some of the changes. At 7,500 feet msl on a nearly standard-temperature day, Regen ran his engine rich of peak at full power (23 inches manifold pressure and 2,500 rpm), and the airplane was soon traveling 156 KIAS with a fuel flow of 9.4 gph. With one long pull on the mixture knob, Regen watched all four CHTs and EGTs peak and then fall while the engine continued to run smoothly. At its leanest setting before the onset of engine roughness, Regen’s speed had dropped to 136 KIAS and the fuel flow to 7.2 gph. By slightly enriching the mixture, he settled on 140 KIAS at 7.4 gph. Put another way, Regen traded an 11-percent reduction in airspeed for a 20-percent drop in fuel consumption. (CHTs stayed below 400 degrees Fahrenheit while rich of peak and about 70 degrees cooler when lean of peak; EGTs were in the mid-1,300-degree range while running rich, and about 1,400 degrees at the lean setting.)

“I’ve noticed that the spark plugs are much cleaner,” he said. “The longer-duration spark allows the fuel in the cylinders to burn more completely, so there’s less chance of lead fouling the plugs.”

ElectroAir electronic ignition systems retail for $1,200 for Experimental versions, and prices for Standard-category versions will be about $3,400 after FAA certification, company officials said.

ElectroAir has applied for FAA certification to replace one of the two magnetos on Lycoming O-235s, O-290s, O-320s, and O-360s. The company intends to get FAA certification on the Continental O-200 next, and then seek FAA approval for a variety of six-cylinder aircraft engines. For more information visit the website.