Get the app Get the app
News & Media GA Serves America: Above the spill

GA Serves America: Above the spill

Scattered clouds explode like popcorn in the humid dawn air above the Gulf of Mexico. Pilot Gary G.

Glen Moss, 22, and his father, Frank, were hired by Airborne Support Inc. as Douglas DC–3 captains, but only Frank ended up in that capacity. Both work for Great Southern Airways out of Punta Gorda, Florida.

Glen flew as captain of a Piper Aztec (two-man crews were required) and acted as an oil spotter while his father captained a DC–3. The younger Moss flew 143 hours in the Aztec and was checked out in a Turbo Aero Commander for another nine hours of spotting.

The workday started with a briefing at 5 a.m., followed by a patrol along a grid to look for oil. Once found, he returned to the base of operations in Houma, Louisiana, to brief pilots of DC–3 aircraft that spray dispersants.

The DC–3s sprayed from less than 50 feet, while Moss guided them from 1,500 feet—where he had a better view of the oil slick. He worked 70 days, with only two or three off. Did he mind it? Not at age 22, though he does admit, “It was monotonous.” — AKM

We don’t have total figures from all government agencies for the months spent containing and cleaning up the oil, but the Civil Air Patrol provided numbers for just its portion of the effort. Numbers here have been updated to reflect all efforts through the final flight on September 10, although there was discussion of new assignments for the CAP from the Houma, Louisiana, command post. BP reimbursed the government for CAP expenses.

Less than a minute after takeoff, their Cessna 182 climbs over the shoreline where workers in yellow vests, with plastic bags over their feet, comb the sand for tar balls. They find barely enough this mid-September morning to cover the bottoms of six white buckets. The Gulf oil spill is drawing to a close.

For the next three hours Hornosky, a retired AT&T service manager, and Riddle, an aviation photographer, scour their targets from 1,000 feet. How many boats are in the staging area? Where are the clean-up crews? Have anchored containment booms come loose? Is there an oil sheen on the water?

After landing, the crew processes the photos and heads home, ready to do it again tomorrow. 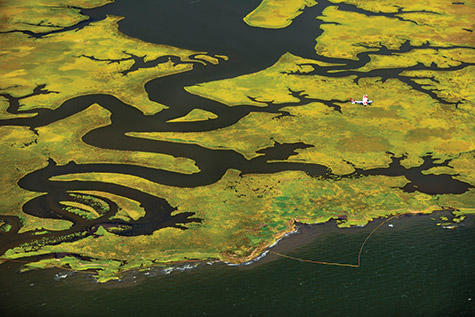 The Civil Air Patrol crews who worked seven-day weeks on the Deepwater Horizon oil spill out of Gulfport, Mississippi, began to feel like the main character from the 1993 movie Groundhog Day. The movie stars Bill Murray playing Phil (as in Punxsutawney), a TV weatherman who discovers that every day is an exact copy of the previous one.

CAP photographer Riddle said that during the peak of the crisis he worked seven days a week. “It’s sort of like Groundhog Day. The same day keeps happening over and over.”

It started when the oil-drilling rig Deepwater Horizon exploded 40 miles off the Louisiana coast on April 20, killing 11 and injuring 17. Thousands of workers were dedicated fulltime to curbing and cleaning up the resulting oil spill. 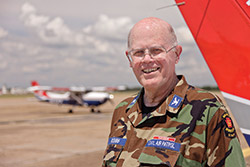 It became the largest mission for the CAP since World War II, in the opinion of Col. James M. Rushing, Southeast Region commander. On September 9, the CAP flew its final mission of the oil spill. “I transferred from working for a living [as an Alcoa engineer] to a fulltime volunteer position,” Rushing jokes.

The CAP flew more than 2,387 hours in 120 days, using 150 members and 54 aircraft. CAP aircraft consumed $137,000 worth of aviation fuel during more than 1,010 flights. All of the bills eventually found their way back to British Petroleum (BP). In July, BP was spending $4 million per day on all aircraft and crews, according to U.S. Coast Guard Capt. Jim Sommer, who works in the aviation coordination center at Tyndall Air Force Base near Panama City, Florida.

The CAP’s main job was to photograph all parts of the operation along the shoreline, and the next day, to photograph it again as a status report. There were occasional breaks to fly state conservation officials over oil slicks, in part to determine what fishing areas to close.

All flights were at low levels, and it was hot in the mid-summer heat. “If it’s 105 [degrees Fahrenheit] on the ramp, it’s 100 degrees at 1,000 feet,” said CAP pilot and retired police detective Danny Watson. Watson drove 30 miles to the Gulfport-Biloxi International Airport every day for 40 days. Eventually, commanders were able to schedule days off for the personnel. 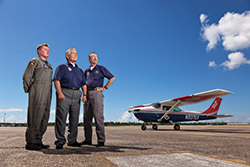 On September 9, Watson, the pilot; Riddle with his cameras; and Bennett, acting as an extra set of eyes in the back of a CAP Cessna 182, flew the final mission. Oil sheens are no longer seen, and strings of floating containment booms to stop surface oil are no longer needed. On the surface, at least, the crisis seems to have ended.

Oil-spill commanders needed a final photo mosaic of the shoreline patrolled by the CAP from Gulfport. That included one-third of the coastline from Louisiana to Florida and required Riddle to take a picture every four seconds, manually overlapping each shot with a tiny portion of the preceding one. That final mission took three flights in one day, totaling 7.5 hours. When it was over, Riddle’s CAP-issued computer at his home (faster than the ones available at the airport) counted 3,272 photos that had to be color-corrected, identified with GPS data, and transmitted.

As usual, this was a rush order, so Riddle began processing at 5 a.m. September 10 before heading to the airport at midmorning for the photos of the crew with this article. 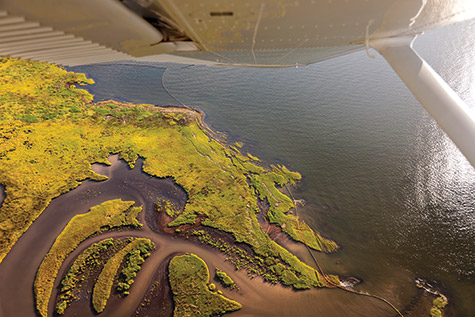 Hank Williams set the standard for country and western music before he died in 1953 at age 29, so how could he have aided in the Gulf cleanup? The answer can be found at Airborne Support Inc. (ASI) at Houma-Terrebonne Airport in Houma, Louisiana. To understand, you need to meet the ASI crew. Howard Barker, ASI’s owner, competed in rodeos for 12 years before going into aviation. “There were two things I always wanted to do since I was a little kid,” he said. “One was to be a cowboy, and the other was to be a pilot.” 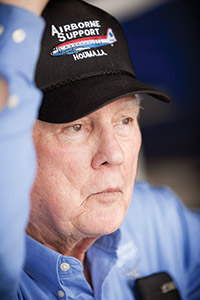 His $6 million Basler Turbo, a BT–67 conversion from a piston-engine Douglas DC–3, sits clean and ready on the spotless gray hangar floor. You saw it in a national BP commercial flying above the water as it prepared to spray dispersant on oil slicks.

“That’s what I want to be when I quit rodeo,” Wilson said, and he went back to sleep. When he had enough of rodeo years later, he called Barker, who advised him to get a commercial pilot certificate. He did and joined Barker’s company, now located at Houma.

DC–3 Capt. Sheila Mabbitt worked in Tennessee for several years and flew stranded pets—100 cages at a time—to new homes after Hurricane Katrina. She met Barker through the DC–3 Network and flew as an observer during the oil spill. She has now joined ASI.

What the pilots have in common is a love of country and western music. That’s where ASI pilot and mechanic Cleatis McEntire, nicknamed Cleko, comes in. He not only likes country music, he sings it—although not for our AOPA Pilot video camera.

“I sing in the airplane while I’m working,” he said. He spent most of his 160 flights in the Gulf as co-pilot of a DC–3, but ended up as a captain in both the turbine and piston-engine DC–3. He took both checkrides in one day. When the hours grew long, the heat in the aircraft climbed, and the crew grew tired, he’d sing Jambalaya (On the Bayou), or A Mansion on the Hill, both iconic Hank Williams songs. He had the right audience for it. 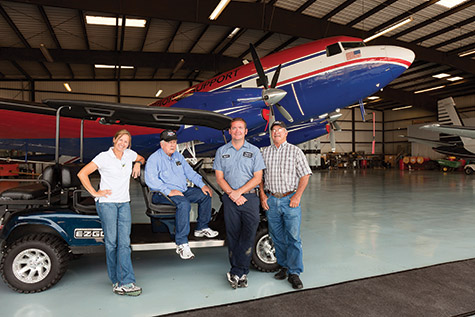 The CAP and ASI weren’t the only GA aircraft flying the Gulf. They carefully mingled with 600 to 800 helicopter flights a day that serve drilling operations, including those by Petroleum Helicopters Inc.; Era Helicopters; and, just for the oil spill, subcontractor Bristow Helicopters.

To be fair, ASI was not the only company spraying dispersant. The Gulf was divided up on a map according to colored sectors. Red meant civilian Lockheed C–130 firefighter aircraft were doing the spraying. Green meant the sector was served by Air Tractor single-engine sprayer aircraft. ASI patrolled the blue sector.

Unusual aircraft included helicopters with grappling hooks that could pull containment booms out of the marshland when no longer needed, and high-altitude NASA remote-sensing aircraft trying to detect oil slicks at night, including a variant of the famous Lockheed U–2 spy plane. Private aircraft also added to U.S. Navy assets.

Pilots interviewed seemed willing to do it all again—just not right away. A CAP pilot may have summed it up best. “If I never see another boom, it will be too soon,” said Watson, not even half-joking.

His wish may go unfulfilled. As Chief Photographer Mike Fizer and I departed Gulfport, the Houma, Louisiana, command center called Rushing to ask for the same type of support the CAP provided in Mississippi and Louisiana. 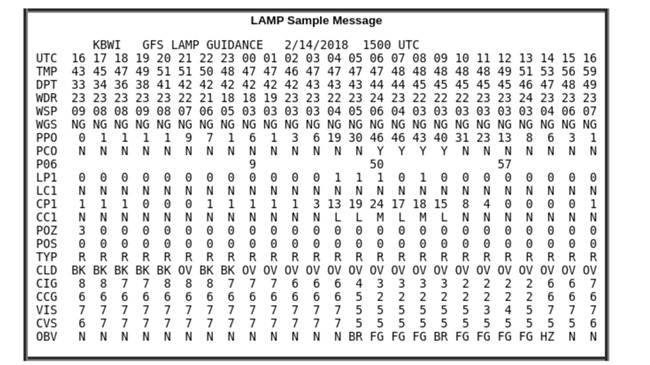