The seeds for Doris Alexander’s yearning to fly were planted when she was a teenager gazing skyward at aircraft darting across the sky. But these were no ordinary aircraft. 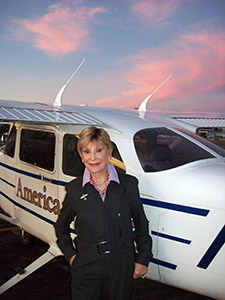 The seeds for Doris Alexander’s yearning to fly were planted when she was a teenager gazing skyward at aircraft darting across the sky. But these were no ordinary aircraft. They were Allied fighters and bombers raining destruction. She was mesmerized by them as she peered from under the bridges where she spent her nights. She felt that bridges offered better shelter than being indoors in Stuttgart, Germany, during World War II.

Born on April 13, 1925, Alexander met Czechoslovakian Milo “Sascha” Alexander in a refugee camp after the war. They fell in love and were married. The couple immigrated to the United States in 1951 and arrived destitute. Together they eventually built the Alexander Machine Company, a remarkable success story unto itself. “It really is true,” she says. “Anything is possible in America for those with good ideas, an education, and the willingness to work tirelessly.”

Through it all, Alexander wanted to become a pilot, but her husband would not hear of it. He passed away in 2005 after 56 years of marriage. A few years later at the age of 83, Doris Alexander pursued her lifelong dream and took her first flying lesson, in an American Flyers Cessna 172 at the Santa Monica Airport in Southern California. She says that her greatest challenges were learning to land and using the radio, but her instructors—they were less than a third her age—bore witness to her bulldog tenacity. She would not give up and soloed a year later on August 7, 2009, after logging 165 hours of dual instruction. She passed her private pilot checkride four months later at age 84 with a total of 229 hours.

“Flying is better than I expected it to be. I love the freedom,” she says gleefully.

Alexander may be the oldest person or woman to earn a pilot certificate. If that were not enough, she currently is working on her commercial certificate and instrument rating, which at the age of 85 she says is a fascinating challenge. “Those IFR charts looked so complicated. I never thought that I would ever comprehend the hieroglyphics, but now I am completely comfortable using them,” she says confidently. “I’m even thinking about buying a Cirrus, but I would never fly it by myself.”

What’s next? She wants to buy a Vespa motor scooter for commuting to the airport. Age is not a deterrent for Doris Alexander, a woman who exemplifies joie de vivre.