Responding to a demand

Watch video live from Summit and at your leisure from anywhere

Video has been a part of the Internet almost since the beginning, but back in the 1990s the only videos were short, grainy news clips that often took minutes to download. Today, though, video dominates the Web. 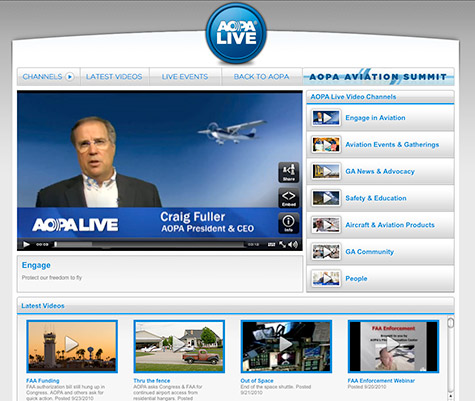 Video has been a part of the Internet almost since the beginning, but back in the 1990s the only videos were short, grainy news clips that often took minutes to download. Today, though, video dominates the Web. Major television networks stream top-ranked broadcast shows as soon as they air. Almost 70 percent of all adult Internet users watch video online, according to the Pew Internet and American Life Project. There are now more video plays daily via the Web than Web searches through the major search engines.

The power of streaming video and video on demand were not lost on AOPA President and CEO Craig Fuller when he took over as leader of the association in 2009. Looking for a way to expand the audience for the great content created at the association’s annual convention, he urged the streaming of interviews with industry leaders at the convention, which he dubbed AOPA Aviation Summit—and thus was born AOPA Live®.

Now, less than a year later, AOPA Live has become a leader in the distribution of general aviation video content. The start-up at Summit 2009 was funded by a generous anonymous gift from an AOPA donor. “We get some 10,000 people at Summit,” Fuller said, “but through the Web we can reach our 410,000 members around the world and other audiences that can learn about general aviation and all we do.” 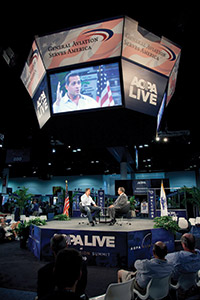 In the intervening year, AOPA Live has posted more than 700 videos to its archives. Through nearly 1 million plays, viewers from more than 160 countries have watched thousands of hours of video on everything from techniques for flying lean of peak to the details of the plan for ADS-B and NextGen implementation. The videos are available for play 24 hours a day, seven days a week.

Warren Morningstar, AOPA Live executive producer/director, isn’t surprised by the out-of-the-box success. “Web video is the next cable. The younger generation is getting most of its video online. Some 84 percent of Internet users age 18 to 29 watch video online. Many in this generation don’t watch traditional TV at all. My daughter, a graduate student, doesn’t have cable and rarely watches over-the-air TV. She and most of her peers watch video on their computers.”

But, as Morningstar points out, video isn’t just about reaching the next generation of pilots. Older adults watch video online as well. Studies show that 78 percent of people with household incomes above $75,000 watch video online. And pilots, who are generally more technically savvy than the general population, probably consume online video at an even higher rate.

AOPA Online showcases the latest AOPA Live videos on the home page. Clicking on any of the links takes you to the AOPA Live page, which can also be directly reached at www.aopa.org/aopalive. There, the videos are arranged into channels by topic. Among the channels are Safety & Education, Aircraft & Aviation Products, GA News & Advocacy, and Aviation Events & Gatherings.

AOPA staff carefully monitor the volume of views and the characteristics of successful videos to continually improve the subjects and quality of the content on the site. Flying technique videos prove among the most popular, with many getting tens of thousands of views within a few weeks of release.

For example, Flight Training Deputy Editor Ian Twombly created a video in the AOPA studio using a flight simulator to demonstrate how to fly a crosswind approach and landing. While a subject every pilot should understand, most of us feel we could do better. Twombly’s video has been a blockbuster.

Similarly, AOPA Pilot Senior Editor Dave Hirschman and Morningstar (Chris Rose was the videographer) created a video that shows how a new Avidyne autopilot can quickly right a Cirrus that is in an unusual attitude. For the video, Rose taped Hirschman flying an Experimental-registered Cirrus upside down. Viewers get to see the airplane quickly right itself once the autopilot is turned on. The video quickly rocketed to the top 10 of video views.

To address the confusion around general aviation’s transition away from leaded avgas, Morningstar created a series of videos interviewing AOPA experts and others, often using Skype and other online tools to virtually bring experts to AOPA’s small production studio. Such advocacy-oriented videos also prove popular with viewers.

While video provides a great showcase for honing flying techniques and unraveling complex advocacy issues, it is also a powerful tool to tell compelling human-interest stories.

“Video is really about emotion,” reminds Morningstar. “We can convey so much more with good video and good audio. When you write that the young soldier in the Wounded Warrior Project said that flying with the Vandy 1 demonstration team, ‘brings back the feeling of being with your guys,’ you get some sense of what it meant to him. But when you watch it on video, hear the catch in his voice, watch the emotion sweep across his face as he remembers serving in a war zone, the emotion becomes palpable. You can’t help but be affected yourself.”

Fuller concurs. He was moved during one of his interviews at Sun ’n Fun by the description of flight provided by a young U.S. Air Force captain representing the Thunderbirds. “She described beautifully what it meant to fly, and to fly those incredible airplanes. The video went viral. It was an exceptionally strong interview.”

“We’re striving for quality video on AOPA Live,” continued Morningstar, a veteran broadcast journalist. “We look for interesting stories, and we first try to tell that story visually. In our interviews, we try to bring new insight into topics of interest and importance to general aviation pilots.”

With the success of the launch at Summit 2009, AOPA Live also broadcast live from Sun ’n Fun and EAA AirVenture this year. 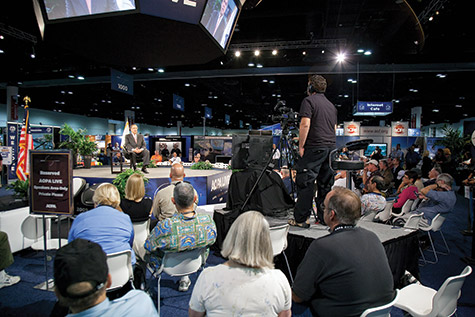 Look for an even bigger presence at AOPA Aviation Summit this month in Long Beach. The AOPA Live center stage will again be in the exhibit hall, with the coverage anchored by veteran TV reporter Maycay Beeler. Events at the show will be broadcast live daily beginning at 9 a.m. Pacific time November 11 through 13.

When broadcasting live, the AOPA Live video viewer will be accessible from the AOPA home page. Individual segments from the live broadcast will appear shortly thereafter in the archives for on-demand viewing.

The latest enhancement to the AOPA Live experience is the ability to view the videos on iPads and iPhones, making them ever more convenient to watch from anywhere.

While AOPA Live has rapidly grown to be a major distributor of general aviation video content, it is still in its infancy, according to Fuller. “Just as we lead with our other media properties, we will be a leader in aviation webcasting. Our members make that possible, and with their continued support we will continue to expand AOPA Live.”