Get the app Get the app
AOPA Members DO more LEARN more SAVE more - Get MORE out of being a pilot - CLICK HERE
News & Media Wx Watch: Freezing Rain Facts

Becoming aware of the worst icing

Freezing rain depends on sandwiching an above-freezing temperature layer between two subfreezing layers. The diagram above shows how a temperature inversion (warm air over cold air, as shown by the red line) melts falling snow. 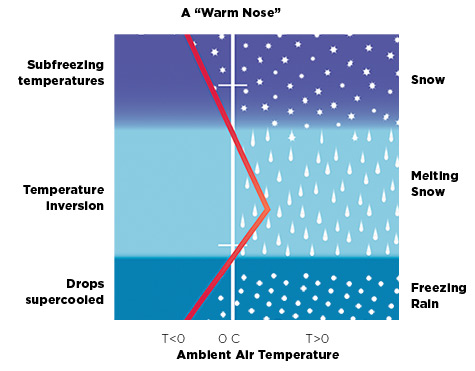 Freezing rain depends on sandwiching an above-freezing temperature layer between two subfreezing layers. The diagram above shows how a temperature inversion (warm air over cold air, as shown by the red line) melts falling snow. The falling melted droplets become supercooled into freezing rain in the subfreezing air below. The red temperature line’s venture into warm air is sometimes called a warm nose because of its shape’s crude resemblance to its namesake.

The icing season is here for most of us, and along with the usual warnings about the dangers of frost and rime, clear, and large-droplet icing, let’s never forget how bad freezing rain (abbreviator: FZRA) can be. Freezing rain is actually another form of large-droplet icing, but its effect on airframes can be more severe. In a matter of seconds, freezing rain can coat an entire airplane, ruin lift, increase weight, block air filters, and render your windshield useless. No wonder that freezing rain ranks right up there with inadvertent thunderstorm penetrations on a pilot’s fear meter.

Freezing rain is often associated with warm fronts, when warm air rides up and over a retreating cold air mass. In this scenario, rain falling from the warm frontal surface’s stratus layers enters the subfreezing cold air below. This supercools the droplets (i.e., renders them just below freezing, yet still liquid), setting them up to collide with and adhere to any other subfreezing object—like your airplane.

Freezing rain also can lurk along the eastern slopes of the Appalachian and Rocky mountains. This usually happens when cold, dense, high-pressure air masses advance southward at low levels. This creates a shallow layer of subfreezing air wedged beneath warmer air—and dammed up against the mountain slopes. This cold-air damming yields a shallow pool of freezing air just above the surface. It may be only 1,000 feet thick, but if it’s raining and you’re landing or taking off, it won’t be long before you’re in deep, deep trouble.

Here’s another thought: Freezing rain can occur in clear air. You can be flying beneath a warm front’s overcast, inperfectly legal VFR conditions, and still have a big problem. Rain falling from the warm front’s stratus layers can turn to freezing rain in the clear air of the receding cold air mass. One minute you’re in perfect weather; the next, your airplane is flash-frozen in freezing rain.

Generalizations aside, it’s important to remember that freezing rain can be very localized, and is one of the trickiest precipitation types to predict. METARs, TAFs, area forecasts, sigmets, airmets, pireps, and low-level significant weather prognosis (“prog”) charts are useful, as always, for a heads-up. But predicting the time that freezing rain begins is notoriously difficult.

Besides its localized nature, freezing rain is heavily dependent on a specific temperature range. That’s one reason it’s so hard to predict. For freezing rain to occur, temperatures must be between 0 and minus 5 degrees Celsius (32 and 23 degrees Fahrenheit). Any warmer, and rain falls. Any colder, and ice pellets (abbreviator: PL) can form. Ice pellets and sleet are the same thing, but it’s “PL” in today’s aviation weather reports and forecasts, so we’ll stick with that. In any event, predicting within a few degrees is daunting—even with modern supercomputers crunching scores of computer models several times a day.

The depth and temperature of the vertical air column also plays a big part. If snow falls through a layer of above-freezing air aloft, then into a deep subfreezing layer beneath that, it will melt and refreeze into ice pellets. The entire trip to the surface can begin at 10,000 feet agl. Freezing rain depends on a shallow layer of subfreezing air—typically 1,500 to 2,000 feet thick.

To further complicate matters, freezing rain can happen at any altitude where a temperature inversion exists. Although we think of freezing rain as a ground-hugging event, this isn’t always so. All that’s needed is a warm, rainy layer of clouds above a shallower layer of subfreezing air.

All of this should serve as a reminder to keep an eagle eye on your outside air temperature (OAT) gauge. If temperatures are in the danger range, you’ve got fair warning of one important element in the freezing rain equation. Too bad so many pilots leave the OAT gauge out of their instrument scans.

Rime ice has a rough and pebbly surface, and it tends to build around the impingement points (the impact points where droplets accrete on leading edges and other projections). Clear- and large-droplet ice is transparent, splatters on impact, and then runs back along airfoils and other surfaces.

Why this “runback” ice? Because clear icing is caused by comparatively large water droplets of about 15 to 50 microns in diameter. (A typical human hair has a diameter of 25 microns.) What’s more, clear icing forms in warmer air (0 to minus 10 degrees C/32 to 14 degrees F) than rime, which lives in the minus 10 to minus 20-degree C/14 to minus 4-degree F range. Put clear ice’s droplet volume together with its viscosity and you have the reason for its runback behavior.

By comparison, the large supercooled drizzle droplets implicated in the landmark November 31, 1994, crash of an ATR–72 in Roselawn, Indiana, are thought by researchers to be in the 400-micron-diameter range. A key finding in that accident was, among other factors, that runback icing extended well aft of the airfoil deice boots

But freezing rain’s runback beats that of clear ice and supercooled drizzle by a large margin. Its droplets are on the order of 1,000 microns in diameter. That’s why its runback can completely cover an airplane. Quickly.

OK, the worst has happened. You’re in freezing rain. We’ve all heard about the advice to climb out of freezing rain. The theory is that you’ll reach warmer air—the air of the warm front or temperature inversion aloft. After all, that’s where the rainfall causing the problem began.

That’s true in theory. If you’re flying an F–15 I’m sure you could climb 2,000 feet or more in seconds and fly your way out of trouble. But with a light general aviation airplane? I wouldn’t count on climbing as blanket advice. Your climb will be sickly, and as more ice builds, airspeed and lift will certainly bleed away in a big, big hurry. Freezing rain may occupy a shallow layer of air, but how shallow is shallow?

Could above-freezing air be just 200 feet above you? Maybe, maybe not. Is it worth the risk to try to find out? Probably not.

Every situation is different, but a landing at the nearest airport, or a precautionary off-airport landing, is probably the best tactic. You’ll need to do the following, in short order:

Next time you’re planning a flight that involves a warm front, take the extra time to gather all the information you can about temperatures aloft. You’re looking for any situation where precipitation from warm, above-freezing air lies above air in that critical, 0-to-minus-5 C range. Briefers should give you plenty of information, but remember how hard it is to predict, then learn what you can to help steer clear of dangerous vertical temperature profiles. You can’t prepare enough to avoid freezing rain.