Get the app Get the app
AOPA will be closed July 4th, in observance of the Independence Day holiday. We will reopen at 8:30 am ET on Tuesday, July 5.
News & Media A man and his wing loop the loop

A man and his wing loop the loop 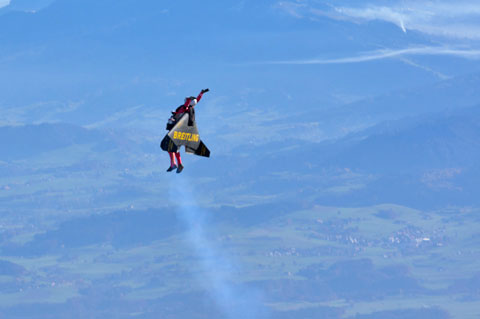 Yves Rossy flew a loop for the first time with the aid of a wing strapped on his back, four jet engines each the size of a loaf of bread, and his body. He has made several previous flights with the wing, including one crossing the English Channel. He lands by parachute after each five- to 10-minute flight.

This time his launch platform was a hot-air balloon. Usually he leaps from an aircraft with the engines already started on his wing. The German-made JetCat P200 jet engines were originally designed for model airplanes. They are built in Germany’s Black Forest region in the towns of Staufen and Ballrechten-Dottinger in southwest Germany.

Rossy normally climbs at more than 1,000 fpm at 111 mph, hits 186 mph in a descent, and cruises in level flight at 124 mph. Each engine generates less than 50 pounds of thrust. He carries eight gallons of fuel. He used a newly designed wing for aerobatics that was shorter than the original wing, and is only 6.5 feet long. The wing design began as an inflatable wing based on a Ukrain design, but wasn’t rigid enough and evolved into a composite wing.

Rossy, a former military pilot and airline pilot, made the historic loop Nov. 5 in Switzerland after launching in the Espirit Breitling Orbiter balloon. He had difficulty starting his engines (they have a 25-second autostart sequence), but once they were all going, he jumped from a platform just outside the balloon gondola at 7,800 feet. ( Watch video of the flight.)

He made not one loop, but two. “It was fantastic,” Rossy said. “The flight went well, despite a little problem when starting my engines. I was able to do my two loopings, and I am very happy.”

Rossy wants the sport of jet-wing flying to expand, and hopes to organize a formation flight with friends. At the rate he is checking off goals, it is safe to assume he will make a strong effort to fly the Grand Canyon—a plan he announced a year ago. A National Park Service employee in the Grand Canyon headquarters office said, given current bans on paragliding, that it would be difficult for Rossy to get a permit to fly the Grand Canyon.