Get the app Get the app
Already a member? Please login below for an enhanced experience. Not a member? Join today
News & Media Kings, Fuller share lessons learned from detention incident 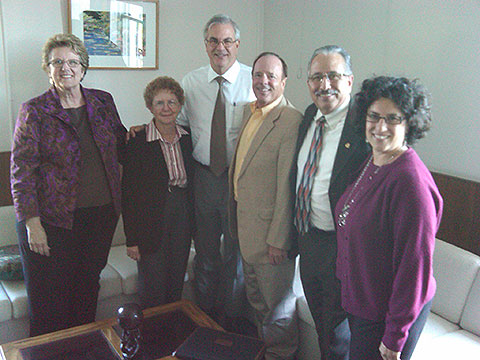 It was a story, complete with pictures, that rocked the general aviation community—esteemed educators John and Martha King handcuffed and detained by police in Santa Barbara, Calif., because the police had been given faulty intelligence regarding the airplane the Kings were flying.

On Monday, Nov. 8, the Kings, accompanied by AOPA President Craig Fuller, returned to Santa Barbara to meet with Mayor Helene Schneider and the city administrator, chief of police, and airport director, determined to make some good come from the incident. At the meeting, the Kings presented guidelines they developed in conjunction with several law enforcement authorities to help police who are called on to make a stop involving GA aircraft. City Administrator James Armstrong, Chief of Police Camerino Sanchez, and Airport Director Karen Ramsdell said the guidelines would be useful since the only analogous protocol their officers had previously was a high-risk traffic stop.

“You know, I suppose we could have stayed upset,” said John, “but we’ve spent our entire professional lives examining potentially dangerous aviation situations and looking for ways to manage the inherent risks.”

“When police officers are faced with an unknown situation, they have to assume it’s dangerous and prepare for the worst,” added Martha. “We hope that these guidelines will give officers a better idea of what to expect when dealing with general aviation.”

“It was heartening to be part of a meeting at which both sides seemed determined to take positive lessons from the incident,” said Fuller. “Mayor Schneider and Police Chief Sanchez appeared genuinely pleased that the Kings had taken the time to develop guidelines to help officers manage an admittedly unusual situation—an on-airport ‘traffic stop’ involving a GA aircraft.”

“While these guidelines are written for law enforcement, it’s important for pilots to do what they can as well to defuse tense situations,” concluded Fuller. “As John and Martha constantly remind us in their courses, we need to recognize and manage risk.”