Lack of educational quality, customer focus, community, and information sharing are the four key reasons student pilots drop out of flight training. That’s the conclusion of Mark Benson, chairman of world renowned market research firm APCO Insight. Benson made the comments as part of his presentation of the research at the AOPA Flight Training Summit Nov. 10 in Long Beach, Calif.

The figures are startling—student pilots drop out of training at a rate that approaches 80 percent. That’s why AOPA, in close coordination with the flight training industry, is working on solutions to stop the major outflow of students, and hopefully increase the pilot population as a result.

The research results kicked off the summit, which was sponsored by Flight Training magazine. More than 100 of the industry’s top minds came together in an effort to stop the alarming student dropout rate. 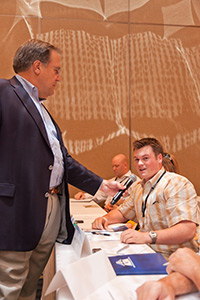 AOPA President Craig Fuller asked for feedback from an attendee.

"I was told I have a lot of courage to undertake this—put two pilots together and you get six ideas,” said AOPA President Fuller, kicking off the summit. “And I said, ‘Only six?’

“This is the starting point of something that will affect all of us for years to come,” Fuller added, quickly getting down to business. “I believe we can make a difference to the future of general aviation, but only by working together.”

The packed meeting began with a detailed look at Benson’s research results, which were based on more than 1,000 respondents. Using a combination of focus groups and a phone survey of pilots, both current and lapsed student pilots, and flight instructors, Benson found that the flight training industry has obvious and important areas for growth.

Perhaps the single most significant finding with implications throughout the flight training community is that despite the industry’s shortcomings—and there were many—the experience of flight remains an inherently positive one which can overcome many of the negative aspects.

“That finding alone is of huge importance because it gives us something we can build on,” said Fuller. “It means student pilots want to like the experience.”

Conventional wisdom has been that time and cost are the driving factors in a student pilot’s decision to continue or drop flight training. But the four broad themes of the statistical model paint a different picture in which educational quality has the biggest impact.

Also, there is a clear desire for a sense of community, of belonging to a special group with unique skills.

"[A] truly unique element of research is the community element—people want to be part of a community and want recognition for it," Benson said. The research suggests that flight schools could enhance the training experience by taking more steps to draw student pilots into the community that can provide additional encouragement and support.

The research also made the important distinction that cost was not a statistically significant reason people drop out of training. While cost is a factor, Benson found that value, and a student’s perception of a school’s ability to be fair and honest, were more important. Student pilots are more concerned about getting good value with the money they spend than about the actual dollars and cents amount. They want to know that the flight school and instructors put the students’ interests first and look for ways to minimize cost and maximize the effectiveness of every dollar spent. Factors like flight simulators and well-maintained aircraft that are available to fit the student’s schedule affect this perception.

Information sharing is another key factor. Student pilots feel at a disadvantage when choosing a flight school and instructor, and even when determining whether they can afford to learn to fly, because the flight schools and instructors have a great deal of knowledge that the student pilots do not—such as the school’s student success rate and realistic estimates of what it will cost to earn a certificate.

After hearing the research results, participants broke out into working groups to start down the long road of solving these many issues. The results of those sessions will be discussed at length in the near future as AOPA and the industry analyze the results and attempt to come up with actionable items that can have a positive impact on the problem.

“This is the beginning of a national, industry-wide conversation on growing the pilot population,” said Fuller. “During the coming year we will be taking this conversation to locations around the country and conducting similar sessions to help build the work we do today.”