Get the app Get the app
AOPA will be closed July 4th, in observance of the Independence Day holiday. We will reopen at 8:30 am ET on Tuesday, July 5.
News & Media Homebuilt 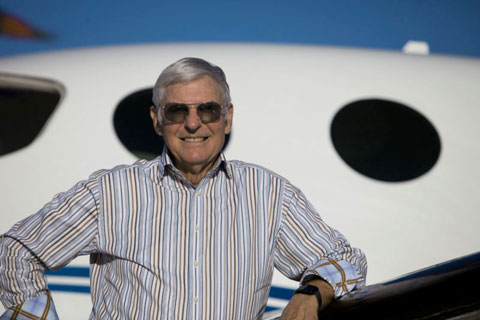 With humor and obvious affection, Mike Melvill and Dick Rutan shared stories from their 35 years of globe-spanning flights in their ultra-efficient aircraft that they built by hand with a receptive crowd on Nov. 11.

With slides of breathtaking lands such as Bora Bora and Easter Island, the pair delighted the audience with anecdotes from their flights. On Easter Island the two decided the famous statues on the tiny island must have been created by what is termed "the other option"—extraterrestials. "The details, the faces on these 720 statutes are so amazing; they looked like they are machine-carved," said Melvill.

Melvill and Rutan flew their Long-EZs around the world in 1997.

Of the Starship, Rutan said it was built in "an environment of total freedom by a designer who thought he could do it and only knew he would fail if he didn't try. The aircraft exists because we had the freedom to take a chance and is a testimony to the spirit of America." The audience cheered and applauded.— Julie Summers Walker