Get the app Get the app
AOPA will be closed July 4th, in observance of the Independence Day holiday. We will reopen at 8:30 am ET on Tuesday, July 5.
News & Media Keynote

AOPA Aviation Summit 2010 opened Nov. 11 with a stunning tribute to our veterans on this Veterans Day. Flanked by a color guard, AOPA President Craig Fuller proudly stood before a video presentation honoring those who have served in the armed forces.

"To those who have served our country, we thank you for your service and your sacrifice. Without you we could never enjoy our cherished freedom to fly," said Fuller. 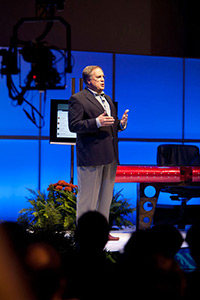 AOPA President Craig Fuller thanked veterans for their service before a video presentation in honor of Veteran's Day.

The keynote address, "Preserving our future," addressed the critical issue of the declining pilot population. On Wednesday, AOPA convened the first ever Flight Training Summit during which APCO Insight research was presented to assembled flight instructors, flight school business operators, industry representatives, and others concerned about the flight training crisis. The more than 100 participants viewed the research, presented by APCO Insight's Mark Benson, and then met in groups to discuss the findings. Benson presented the results of his research Nov. 11 to the standing-room-only group attending the keynote address.

Broadcast on AOPA Live, the keynote featured Fuller and Benson discussing the results of the research, which included focus groups in different regions of the country and a quantitative survey of 1,000 respondents, including flight instructors, pilots, student pilots, and lapsed student pilots.

"We took all of this statistical mumbo-jumbo and have turned it into information we can use," said Benson.

Relaxed in armchairs on the AOPA Live stage, Fuller and Benson guided the audience through the research and provided insight. Conventional wisdom has been that time and cost are the driving factors in a student pilot’s decision to continue or drop flight training. But the broad themes of Benson’s findings paint a different picture in which educational quality has the biggest impact.

Not surprisingly, cost is a factor. But student pilots are more concerned about getting good value with the money they spend than about the actual dollars and cents amount. Information sharing is another key factor.

Perhaps the single most significant finding with implications throughout the flight training community is that despite the industry’s shortcomings, the experience of flight remains an inherently positive one which can overcome many of the negative aspects. That finding gives us something we can build on, said Fuller.

Benson reiterated his amazement that his firm's research discovered that student pilots are interested in a "sense of community," which he claims is a first in his research.

"The message is we need to speak to their aspirations," he said. The research suggests that flight schools could enhance the training experience by taking more steps to draw student pilots into a community that can provide additional encouragement and support.

AOPA Director of Public Relations Jennifer Storm joined Fuller and Benson to summarize the findings and to look to the future. She said that AOPA Editor in Chief Tom Haines has announced the planned publication of "Flight School Business," a newsletter that will spotlight the "good things" in the aviation industry. She also said that more meetings will take place throughout 2011 in different regions throughout the country.

"There are a lot of good things to come," she said, and Fuller echoed her statement saying this is an issue AOPA will focus strongly on in 2011.