Get the app Get the app
Already a member? Please login below for an enhanced experience. Not a member? Join today
News & Media Avgas 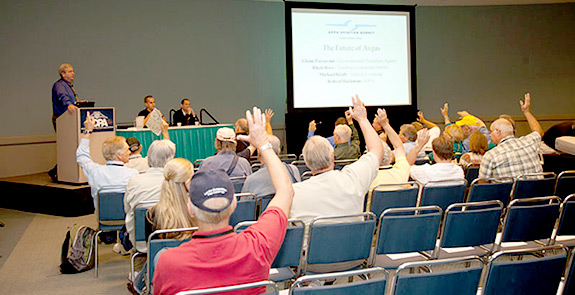 Slow and steady. That's the message from AOPA, the Environmental Protection Agency, and engine manufacturers Teledyne and Lycoming at a forum on the future of avgas Nov. 11 at AOPA Aviation Summit.

Glenn Passavant of the EPA explained the reasons the EPA established an advance notice of proposed rulemaking (ANPR) regarding general aviation lead emissions, which received more than 500 comments. The comment period ended in August. Passavant said the EPA wants to move in an orderly, fact-based process and only make a recommendation when it thinks there is a viable way forward. It is the FAA that would then be the agency that would have the obligation to take action.

"Changing fuel changes a key input,” Kraft said. “We must work logically through the process."

Teledyne President Rhett Ross agreed that the challenge of finding a replacement fuel is a safety issue. "You are changing a very important variable in a very complex system,” Ross said, later explaining, “We are not a fuel company. We can't start to do what we need to do until the fuel is known."

"Materials compatibility is the largest challenge," Kraft added. "But it is not one we see as unsolvable."

AOPA Vice President of Regulatory Affairs Rob Hackman, who participated in the forum, noted that “this will affect everyone in the industry.”

The general aviation industry currently faces two separate challenges regarding leaded avgas: In the short term, it must reduce lead emissions by 2017; and in the long term, it faces the regulatory process set in motion by the ANPR, which has the potential to advance the elimination of lead from avgas. The latter has no deadline and does not spell a certain ban on lead. A GA coalition on avgas, of which AOPA is a participant, is working on short- and long-term efforts.