Fun to Fly has a new owner: N.H. pilot to take home the prize

“The day you give away an airplane is a very good day,” Fuller said.

Brown learned last week that he is the Remos’s new owner during an elaborate surprise concocted by AOPA staff.

Continuing a long tradition of surprising AOPA’s sweepstakes winners, Brown was lured to the Lebanon Municipal Airport ( KLEB) on Nov. 3 in a scenario that calls to mind the film “The Sting”—except that there were no losers in this gambit. The bait: Brown received an e-mail invitation from the president of Redbird Flight Simulations. Jerry Gregoire coaxed Brown to the airport by telling him that he would be participating in a research study on the impact of motion simulation on ab initio flight training. He offered to show Brown Redbird’s newest innovation in flight simulation. 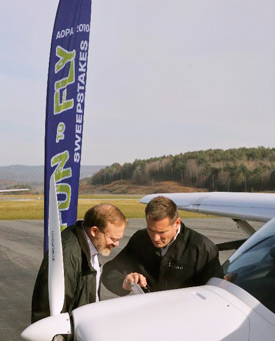 In a twist that gave our surprise just the right dash of realism, Redbird does actually have an innovative new flight simulator called Parrot—an artificial intelligence driven radio communications training system that is designed to work with its simulators. Brown, a certificated flight instructor who has had a longtime interest in sim technology, couldn’t resist the chance to see it for himself. “It was the emergence of your company that finally convinced me to give up the idea that I ought to figure out how to make real flight simulation available to GA pilots,” he wrote to Gregoire to accept the invitation.

He arrived at Lebanon on a clear, brisk morning to find Gregoire waiting for him at Signal Aviation Services, a fixed-base operator. Gregoire sat him down in front of an elaborate setup and began demonstrating the sim’s capabities. Parrot’s virtual ATC interacts via voice with a student using the sim. The pilot can talk to the computer, and it understands and replies as ATC would in actual flight situations.

Several minutes into the demonstration, the simulator announced, “Congratulations Yorke Brown, you are the winner of the 2010 AOPA Sweepstakes Remos! Enjoy your beautiful new airplane.” Just to make sure Brown had got the message, the sim repeated the good news—this time in Fuller’s voice. Moments later, Fuller stepped into the room to congratulate him in person.

“He just froze,” Fuller said. “He was genuinely surprised.”

“I wondered what was going on” when Fuller entered the room, Brown said. He admitted that he hasn’t closely followed coverage of the 2010 sweepstakes in AOPA publications, because he understands the odds involved in being chosen as winner. The additional entries he received because he signed up for automatic annual renewal of his membership were what made the difference. 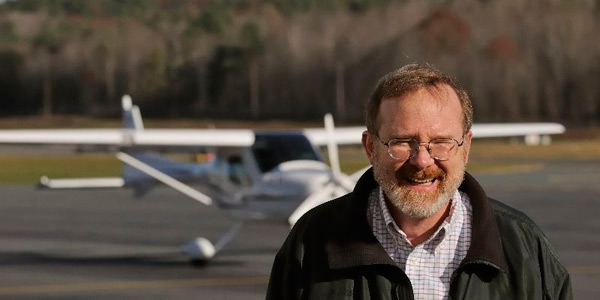 Seeing is believing, and so Fuller led the winner to a picture window overlooking the ramp at Lebanon, where a Remos GX sat on display. Here’s where staff had to be a little creative yet again. The actual Fun to Fly Remos was tucked away in a hangar at Santa Paula Airport in California, waiting to be flown to Long Beach for the opening day of AOPA Aviation Summit. But we couldn’t spring a surprise on the winner without an airplane to show him. The “stand-in” Remos GX was flown to Lebanon by John Rathmell, a demo pilot for Mid Island Air Service in New York. To ensure that a Remos would be in place for the surprise, Rathmell flew in from Lancaster, Pa., the night before and made sure that the airplane was hangared and out of sight. He even went so far as to leave a message for an AOPA staff member that was worthy of a spy novel: “The fox is in the henhouse!”

Rathmell took Brown for a quick flight around the LEB area to allow him to get a feel for the Remos. Brown, a CFI who has one primary flight student at the moment, emerged from the airplane and said, “It flies like a dream. It’s very light on the controls, not only [in response] to what you do, but what the air does—which makes it fun.”

“He handled it great,” Rathmell said.

A member since 1986, Brown said he loves to fly in New Hampshire. “No matter where you go there are things to see and things to do.” Each time he takes off from the airport, he says, he looks out the window and “I’m glad I’m a pilot and I live in this airspace.” Brown joined AOPA as a student pilot and has maintained his membership continuously. “The work AOPA does is something I value,” he said. —Jill W. Tallman