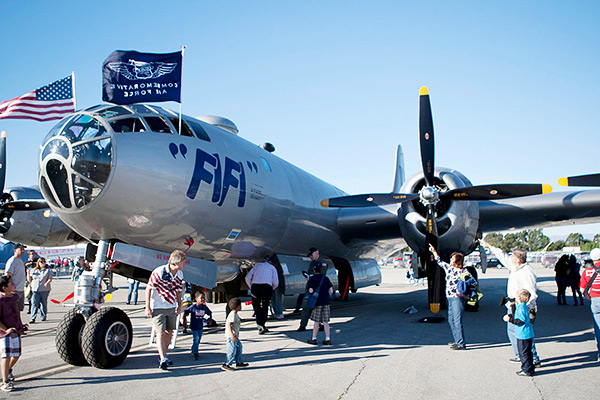 With the snarling roar that only four massive Wright engines can make, the only B-29 Superfortress still flying taxied majestically to her spot at Long Beach/Daugherty Field on Nov. 11, where she is greeting visitors to Airportfest and AOPA Aviation Summit.

Spectators at Airportfest ran as close as they could get to the flight line to watch the World War II bomber swivel around into position on the ramp. As the last of the four propellers spooled down, they burst into applause.

“This is the first time that the Commemorative Air Force will participate in AOPA Aviation Summit,” CAF President/CEO Stephan Brown said. “It’s an exciting time for the CAF, and we are proud to be participating in such an important aviation event. This is Fifi’s first tour since 2006 and AOPA’s Airportfest is a great event to celebrate her return to telling the story of American military aviation through flight.”

Visitors to Airportfest can view the airplane free of charge, or take a cockpit tour or a ride in the airplane itself. For more information on scheduling a ride, see the website. —Jill W. Tallman.