Get the app Get the app
AOPA will be closed July 4th, in observance of the Independence Day holiday. We will reopen at 8:30 am ET on Tuesday, July 5.
News & Media Kings

The worst ramp check he’s ever had 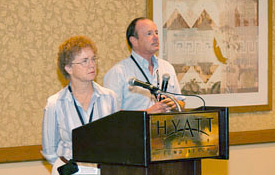 The most surprising thing John and Martha King discovered about their recent, highly publicized detention by the Santa Barbara, Calif., police is that similar tactics are used against general aviation pilots regularly.

In fact, the initial delivery flight of the 2009 Cessna 172 they were flying that day had resulted in the pilot’s detention by police in Wichita, Kan. The airplane’s N number previously belonged to a 1968 Cessna 150 that had been reported stolen a decade ago in McKinney, Texas. The FAA reissued the N number, and the Drug Enforcement Agency’s multi-agency intelligence center reported to Santa Barbara police that a stolen aircraft was due to arrive there when the Cessna 172 flown by the Kings filed an IFR flight plan.

The Kings were told to taxi to a remote airport location and taken into custody at gunpoint using the same procedures police would use in a felony traffic stop. Since then, the Kings have found that the FAA routinely reissues N numbers of stolen airplanes (about six general aviation airplanes are stolen annually), but only the local jurisdictions that report the airplanes as stolen can remove them from the stolen aircraft database.

The Kings have developed a police checklist for investigating stolen airplanes and detaining pilots safely, and the Kings have asked the FAA to stop reissuing stolen N numbers. AOPA officials also are working with the law enforcement to update their databases to avoid similar problems in the future.

In a forum at AOPA Aviation Summit, John said he wasn’t as bothered by his own detention as he was watching his wife handcuffed at gunpoint.

“If you do this enough times, someone is going to get shot,” he said. “It’s bad for GA that this happens.”

On a lighter note, the Kings say their experience has given them a lifetime of cocktail-party jokes.

“I’ve made some bad landings, but I didn’t think this one was criminally bad,” John said. He also described the strong-arm tactics as “The worst ramp check I ever had.”