Faster than a speeding bullet 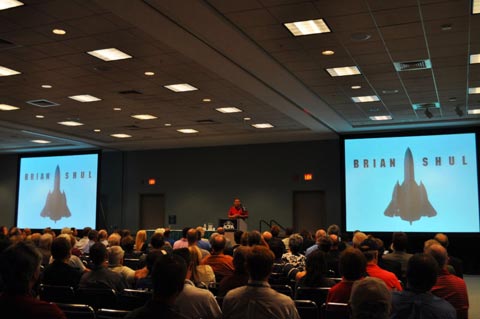 Air Force fighter pilot Brian Shul is widely considered a hero, but before a packed audience at AOPA Aviation Summit on Nov. 11, the former SR-71 pilot said he doesn’t consider himself a hero. Rather, he’s grateful to have had a chance to serve the United States.

“I never did anything really great or famous,” Shul said. “Leaving your airplane in the jungle is not any great claim to fame.”

During a presentation illustrated with his own photos of the SR-71 in flight, Shul talked about his experiences flying “a piece of history: the spy plane they couldn’t shoot down.”

After flying 212 combat missions, Shul was shot down near the end of the Vietnam conflict, suffering burns so severe that he was not expected to live. He remained in intensive care for two months. “While I was there, I learned a lot about life,” he said. “Nobody’s ever trained to be a patient in a hospital, much less a burn ward. It was in this two months that I really learned and formulated ideas and thoughts about life” that, 35 years later, continue to guide him.

After a year of hospitalization, surgeries, and physical therapy, Shul was able to pass a flight physical and return to active duty. “When I got out of hospital a year later, I was now armed with a new philosophy: ‘Live fearlessly. What do you have to lose? You’re not going back to the burn ward,’” Shul said. “Follow your passion with fearlessness, because why would you want to live your life without your passion? ... Life is short, and it’s uncertain. It’s not short or uncertain—it’s both. Every day is such a gamble and such a gift that we should not waste any more time.”

When he applied to fly the SR-71, Shul said, he was told that his medical records would probably preclude him from any possibility of joining the program. “I applied my philosophy: What’s the worst that could happen?” Shul said. “All they can do is say no. They can’t send me back to the burn ward.” He had the sixth highest score ever achieved for the flight exam. “It’s just because I made the effort,” he said. “I tried.”

Perhaps you’ve had a story from the Internet forwarded to you. It involves pilots who are asking a Los Angeles Center controller to read out their ground speeds in a game of one-upmanship, going from a Cessna to a Twin Beech to a Navy F-18. The punchline, of course, is that an SR-71 pilot on the frequency puts an end to the one-upmanship by asking for his groundspeed: 1,842 knots.

Shul and his back-seat pilot, Walt Watson, were in that SR-71.

Shul has written two books about the airplane. “Why did I take all these pictures? I got permission from the commander,” he said. “This jet isn’t going to be around forever.” Yet in seven years of flying the SR-71, he was able to take just 200 photos. “People would say, ‘Why do you take more pictures?’ It’s a passion. I’m following my passion.”

After retiring from the Air Force, Shul continues to pursue his writing and photographic interests and has written two books about flying with the U.S. Air Force Thunderbirds and the U.S. Navy Blue Angels.

AOPA staffer Chris Delisio flew from headquarters in Frederick, Md., with something important to his dad—a first edition copy of Shul's The Untouchables: Mission Accomplished. Delisio's father, David C. Delisio, asked his son to get Shul's autograph. The spy pilot was happy to sign the book, which he showed off to others and said. "Your dad has a real classic!" —Jill W. Tallman