Bulldog gets his shirttail 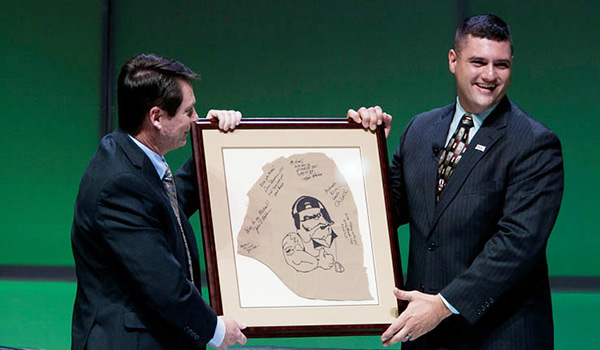 For the first time in its history, AOPA trained a student pilot in its sweepstakes airplane. But not just any pilot and not just any aircraft. Marine Sgt. Michael Blair, a wounded warrior from the war in Iraq, trained for his sport pilot certificate in the 2010 Fun to Fly Remos GX light sport aircraft. (Read more in “Turning Bulldog loose” in the July 2010 AOPA Pilot.)

On the occasion of Blair's solo earlier this year, flight instructor Dave Hirschman cut the Marine's shirt—much to his shock and horror (how would the Marines feel about cutting his uniform?)—in the traditional rite of passage for student pilots.

On Nov. 13 AOPA Pilot Editor in Chief Tom Haines presented Blair with that shirttail, signed by AOPA staffers and decorated with a "bulldog"—Blair's nickname—drawn by AOPA artist Samantha Duggan, displayed in an elegant frame. Haines called Blair an "amazing man."

Blair earned his sport pilot certificate in June and has happily and easily joined the aviation community, saying he will continue on to earn his private and eventually CFI. "I hear you get paid to fly other people's airplanes," he quipped.