AOPA on Nov. 13 awarded its highest honor for government officials to Victor Bird, director of the Oklahoma Aeronautics Commission. The Joseph B. “Doc” Hartranft Jr. Award is presented annually to an elected or appointed government official, whether federal, state, local, or foreign, who has made significant contributions to the advancement of general aviation. This year’s presentation was made during a special awards program on the AOPA Live® stage at AOPA Aviation Summit in Long Beach, Calif.

“State aviation directors are often overlooked as key promoters and protectors of general aviation,” said AOPA President Craig Fuller. “As the director of the Oklahoma Aeronautics Commission, Vic Bird has done an outstanding job in using the state’s resources to advance the cause of the state’s 113 public airports, creating a climate in which general aviation will grow and thrive.”

In 2007, Bird was instrumental in winning the adoption of the Oklahoma Airport Modernization Bill, which made 49 of the state’s regional airports eligible for grants for specific airport-improvement projects, including the costs for projects primarily used for general aviation.

In 2008, he followed that with the Aerospace Industry Engineer Work Force Bill, which provided new engineers with a $5,000 state tax credit for choosing to work for an Oklahoma aerospace company.

His most recent accomplishment centered on the passage in 2010 of the Aircraft Pilot and Passenger Protection Act, which protects the state’s public-use airports and military bases from height obstructions and incompatible land use by giving the Oklahoma Aeronautics Commission authority to regulate construction in designated approach areas. With the increasing prevalence of tall man-made obstructions all over the country, this legislation provides a model for other states to follow to ensure that development of this nature will not undermine aviation safety. 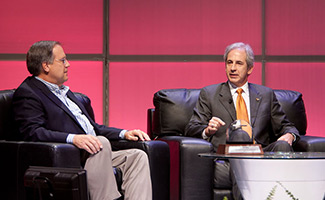 Bird also serves as chairman of the National Association of State Aviation Officials, is a member of the Governor’s Council for Workforce and Economic Development, and is on the aviation advisory boards for both Oklahoma State University and the University of Oklahoma.

The Joseph B. “Doc” Hartranft Jr. Award is named for AOPA’s first employee, longtime president and former chairman of the board. Recipients of the award are outstanding advocates of general aviation. Their selection can be based on one action or a series of actions resulting in a benefit to GA in the areas of utilization, safety, facilities, operation, regulation, education, or information. —AOPA Communications staff