Pilots  go behind the scenes of Hollywood flying Fornof showed a variety of clips from decades of movies with the famous scene from the 1983 James Bond film Octopussy of a BD-5J flying through a hangar drawing the most applause from the sold-out crowd.

Fornof also complimented actor Harrison Ford for his skillful flying in Six Days, Seven Nights, even though Ford had only logged about 300 hours flying time at the time he flew the de Havilland Beaver in the film set in Hawaii. 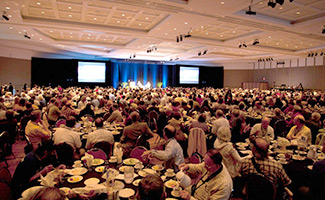 Chierici produced Speed and Angels , an award-winning documentary about the making of Navy fighter pilots. Chierici flew F-5s in an adversary squadron at the time and used his behind-the-scenes access to tell a compelling, personal story that avoided computer animation and totally relied on actual film with real in-cockpit audio.

Chierici said he has become an enthusiastic general aviation pilot in recent years and flies a Mooney and Yak 50 from his home near San Jose, Calif.