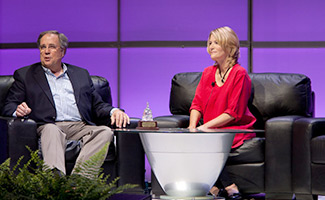 A self-described “Mooney Girl” is this year’s recipient of AOPA’s Joseph Crotti Award for service to general aviation in California. Jolie Lucas, co-founder of the Mooney Ambassadors, was honored for her work to protect Oceano Airport in San Luis Obispo County.

A local developer decided he had a better idea of how to use the land Oceano sits on and, over the objections of county officials, pressed ahead with highly controlled “public” meetings to try to win community support to close the airport and let him build on it.

Lucas organized local pilots to attend those public meetings. With her encouragement and constant communication with pilots and AOPA, the developer’s meetings were overwhelmingly stacked against closure of the airport. She recruited pilots and began a campaign to win community support, organizing a beautification project for the airport, which had become somewhat rundown. Buildings were painted and drought tolerant plants planted, all with volunteers and donated materials. She and her fellow pilots also hosted a “movie night” at the airport, inviting pilots and the public to watch movies in a campground adjacent to the airport.

“2010 is AOPA’s Year of Engagement, and Jolie has certainly gotten engaged—with her fellow pilots and her community’s leaders,” said AOPA President Craig Fuller. “Her efforts in support of Oceano Airport in particular, and more broadly, of all of general aviation through the Mooney Ambassadors, are shining examples of what we can do when we work together.”

The Mooney Ambassadors’ threefold mission is to support the Mooney Airplane Company, promote general aviation, and ensure pilots have someplace wonderful to fly. Lucas has flown her Mooney throughout California, giving presentations on how to promote GA. She blogs for Forbes magazine on her passion for general aviation and was interviewed this summer on AOPA Live at EAA’s AirVenture at Oshkosh.

California is home to 255 public-use landing facilities and fully 10 percent of the U.S. pilot population, or 61,709 pilots. The Crotti Award, named for Joseph Crotti, longtime California State Aviation Director and AOPA Regional Representative for that state, is given to a California resident who has demonstrated the same unbridled passion for promoting GA and protecting community airports as Crotti always did. —AOPA Communications staff