Get the app Get the app
Already a member? Please login below for an enhanced experience. Not a member? Join today
News & Media Sharples

AOPA on Nov. 13 awarded its highest honor for individuals to Marjy Leggett, a volunteer for AOPA’s Airport Support Network, for her efforts to promote and protect her home airport, Vista Field in Kennewick, Wash. The Laurence P. Sharples Perpetual Award is presented annually to an individual who has made significant contributions to the advancement of general aviation. This year’s presentation was made during a special awards program on the AOPA Live® stage at AOPA Aviation Summit in Long Beach, Calif.

When, in 2008, the city of Kennewick began exploring how best to use the airport land, including possibly closing the airport, Leggett rallied fellow pilots and other airport supporters to prove to the city that keeping Vista Field open was the best option.

“Marjy’s efforts in Kennewick are a perfect example of how the local pilot community and AOPA can work together to protect and preserve America’s network of public-use airports,” said AOPA President Craig Fuller. “With back-up support from our airports staff at our Frederick, Maryland, headquarters, she and her fellow airport supporters were able to educate the broader community about the value of Vista Field.” 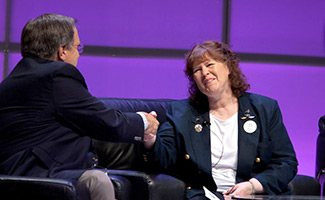 The situation at Vista Field was complex. Although located within the city of Kennewick, the airport is owned and operated by a separate governmental body, the Port of Kennewick. Leggett solicited help from other pilots, forming a local chapter of the Washington Pilots Association, and organized local business leaders to explain to city officials just how important the airport is to those businesses.

Their community education efforts led to the election of a number of aviation-friendly city and port candidates, and ultimately to a unanimous vote this year by the Port of Kennewick Commission to keep the airport open.

The Laurence P. Sharples Perpetual Award is named for AOPA’s first chairman of the board and is given each year to the person or persons who best emulate the unselfish contribution to general aviation which characterized the life of L.P. Sharples. —AOPA Communications staff