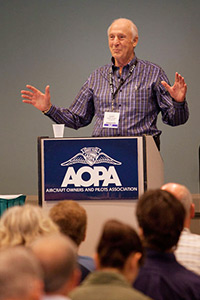 Celebrated author, veteran flight instructor, and former TWA captain Barry Schiff has been forced to turn around after takeoff because of an engine failure twice in his flying life.

As a young flight instructor in 1956, Schiff was with a student in a Stinson when the engine quit. He elected to turn around to make the runway even though conventional instruction says to land straight ahead. ATC chastised him, however. He replied, “Why would I get in trouble for saving my butt?"

In 1972 while flying a Super Cub on floats the engine quit again. He turned around, but a Cessna sat parked in his way. With no other options, he stuck with his decision. The floats scraped the wings of the Cessna and he was later sued. "But I don't care; I'm here to talk about it," he said.

Schiff's presentation, "Engine failure after takeoff," defies the iron-clad rules governing this controversial issue. He discusses the pros and cons and when it can be safe to make the so-called "impossible turn."


"When an engine fails, your mind turns to mush. Seventy-two percent of all engine failures after takeoff are the pilot's fault. You must be as prepared to abort as you are to takeoff," said Schiff. "The good news is you probably will never have to do it, but you should be prepared."

Schiff suggests practicing the turn, performing it with an instructor, and considering the options.

While presenting the checklist for performing a turn after takeoff, Schiff admonished that he was not recommending the maneuver, but suggesting pilots be prepared for the possibility. —Julie Summers Walker