Get the app Get the app
AOPA will be closed July 4th, in observance of the Independence Day holiday. We will reopen at 8:30 am ET on Tuesday, July 5.
News & Media Auction (2)

The AOPA Foundation’s first ever online auction closed Nov. 13 after raising more than $250,000 that will be used to support the organization’s major initiatives. Foundation President Bruce Landsberg made the announcement at a fundraising dinner aboard the Queen Mary hotel. The former cruise ship is permanently docked in California’s Long Beach Harbor, near where AOPA held its Aviation Summit over the previous three days. 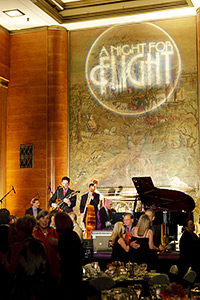 The highest priced item in the auction was a new Classic Aircraft Waco YMF-5D, which Virginia AOPA member Mark Rossi bid up to $330,000. Classic provided the new Waco, which Rossi gets to spec out from the factory, at cost, allowing the foundation to keep the difference between cost and the winning bid. AOPA Pilot Senior Editor Dave Hirschman and photographer Chris Rose flew a Waco from Frederick, Md., to Long Beach to act as a stand-in display for what Rossi was bidding on. ( See breathtaking video of the trip created by the Recreational Aviation Foundation.)

The auction featured 96 items. Among the other unusual items was a lunch and a flight with actor/pilot Harrison Ford, which netted $55,000. Meanwhile, an experience with celebrity chef/author/pilot Alton Brown brought in $10,100. A FlightSafety International training course brought in more than $15,000, while an experience with aerobatic pilot Sean D. Tucker was bid up to $12,200. A complete list of the auction items is available online.

Landsberg declared the first auction a big success and noted how the donations would help the foundation with its primary goals, which are to improve safety, protect airports, increase the pilot population, and improve the perception of general aviation. 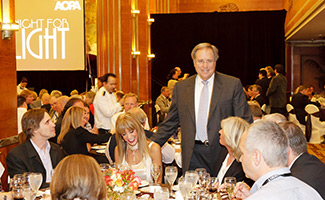 Special guest Chris Kunze, former Long Beach Airport manager, reminded the audience of the importance of airports to GA. Kunze shared details of challenges associated with protecting the airports he has been associated with in California, including Long Beach and Camarillo. Long Beach is the oldest municipal airport in the country, having opened in 1923, yet it deals with encroachment and noise issues every day. He acknowledged AOPA’s proactive approach to helping communities establish compatible land-use areas around airports.

Among the other dignitaries at the dinner were aviation legend Bob Hoover, high-time Learjet pilot Clay Lacy, airshow pilot Julie Clark, former AOPA President Phil Boyer, and many others.