Get the app Get the app
Already a member? Please login below for an enhanced experience. Not a member? Join today
News & Media &lsquo;Pioneers&rsquo; gallery highlights aviators who pushed limits 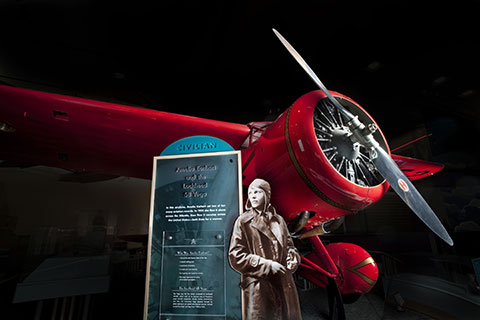 The red Lockheed Vega that Amelia Earhart flew solo across the Atlantic Ocean in 1932 is on display with artifacts from Earhart’s life in the “Barron Hilton Pioneers of Flight Gallery.” Photo by Eric Long.

The redesigned gallery tells the story of the 1920s and 1930s, when aviators pushed the technological and social limits of flight. It highlights early 20th-century pioneers such as the Tuskegee Airmen, Charles and Anne Morrow Lindbergh, and rocket inventor Robert Goddard—and aims to inspire a new generation of aviation pioneers with early-childhood educational programming.

“These articles are technologically intriguing, remarkable in performance, and visually stunning,” said Associate Director for Collections and Curatorial Affairs Peter Jakab in a press preview Nov. 16. The machines also represent people’s personal struggles and creative inspiration, he said. “Every one of these objects represents compelling human stories.”

The exhibit, divided into “Black Wings,” military aviation, civilian aviation, and rocketry, spotlights a time Jakab called “the adolescence of aviation.” Aircraft such as the Curtiss R3C-2 racer Jimmy Doolittle piloted to a world speed record in 1925 and Earhart’s streamlined Lockheed 5B Vega represent significant technological advancements from the Wright’s original invention showcased in the next room. But aviation was only beginning to become an everyday part of American life. With a series of records and firsts, pilots pushed the limits of technology, expanded the role of aviation in the military, challenged racial and gender biases, advanced the idea of rocket-powered travel to space, and ushered in the age of airlines.

“By the end of the 1930s, there was no turning back. We were now a species with wings,” Jakab said.

The period between World Wars I and II also expanded the ranks of pilots with the arrival of affordable light airplanes, most notably the Piper Cub. A yellow J-2 Cub, the first to bear the Piper name, hangs in the gallery to represent general aviation, said curator Dorothy Cochrane, a pilot and AOPA member. The Cub served as a primary trainer for thousands of pilots of the era, including the many military pilots of World War II who trained through the Civilian Pilot Training Program.

“The Piper Cub pioneered light aviation, private aviation for the individual,” said Cochrane, who also serves on the board of directors of Women in Aviation, International.

The original Pioneers of Flight gallery opened in 1976 with the opening of the National Air and Space Museum on Independence Avenue in Washington, D.C. A $10 million grant from the Conrad N. Hilton Foundation established the Barron Hilton Endowed Fund in 2008 to upgrade the gallery and provide ongoing early childhood educational programming. Now it is reopening with additional artifacts, research, and historical documents to tell the story of an era. The flight suit of African American aviator and prominent advocate for integration of the Army Air Corps Chauncey Spencer and period models of Naval airplanes are among the new artifacts that now take their place alongside the iconic aircraft. 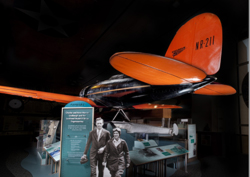 Charles and Anne Morrow Lindbergh used this Lockheed Sirius to cross the Atlantic in 1933, researching flight paths for Pan American Airways. An Eskimo boy in Godthaab, Greenland, named the aircraft Tingmissartoq, meaning "one who flies like a bird." Photo by Eric Long.

“In addition to some of the most iconic artifacts in the museum’s collection, the gallery features a number of objects never before put on display, as well as rare archival documents,” said Gen. J.R. “Jack” Dailey, museum director. Many of those items, such as snowshoes and emergency supplies the Lindberghs carried with them on their northern survey routes in the Lockheed Sirius Tingmissartoq, are placed low to the ground for the benefit of children; a hangar display in the gallery has toys, tools, a puppet theater, presentations, and more to capture the imagination of 3- to 8-year-olds.