Get the app Get the app
AOPA will be closing at 2:30pm ET Wednesday, November 23rd, and will remain closed Thursday and Friday in observance of the Thanksgiving holiday. We will reopen Monday November 28th at 8:30am ET.
AOPA Members DO more LEARN more SAVE more - Get MORE out of being a pilot - CLICK HERE
News & Media 500 hp diesel tested in Germany 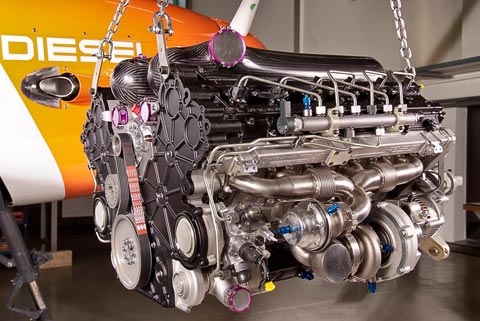 Raikhlin Aircraft Engine Developments (RED), a new venture founded by Wladimir Raikhlin and his associates, has flown a 500-horsepower diesel engine on a modified Yak 52. The propeller for the water-cooled, twelve-cylinder engine called RED A03 is gear driven.

It was built by RED Aircraft GmbH in Adenau, Germany. The engine generates 500 hp for takeoff at 3,900 rpm. The engine weight at the moment is 705 pounds, according to diesel engine consultant Andre Teissier-duCros. The company brochure does not give the weight, marking that specification as “to be announced.” The weight includes two alternators, a starter, an engine/gearbox oil heat exchanger, and a prop governor.

The engine will first be certified in Europe. Any changes required during development could increase the weight. The engine is intended to bridge the gap between piston engines and turboprop engines.