Get the app Get the app
Already a member? Please login below for an enhanced experience. Not a member? Join today
News & Media Student solos five aircraft on sixteenth birthday 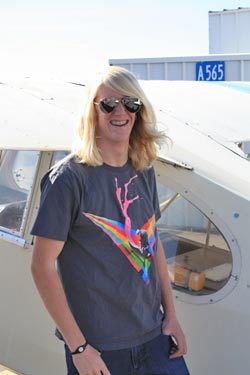 Soloing is a thrill for every student pilot. Soloing in several different airplanes takes that excitement to a new level, as Justin McBurney of Apple Valley, Calif., learned on Nov. 14. He soloed five airplanes on the morning of his sixteenth birthday, the earliest age at which a student pilot can fly a powered aircraft without a flight instructor.

McBurney flew three Cessnas (150, 152, and 172), a Piper Warrior, and an Aeronca Champ. His father, Gary, is his flight instructor at Apple Valley Airport; his mother, Jeneace, became a private pilot earlier this year.

McBurney took and passed his driver’s test three days after he soloed in the five aircraft. He hopes to complete his private certificate and instrument rating on his seventeenth birthday. The shirt tail that commemorates his solos reads, “That was fun. What’s for lunch?”