Get the app Get the app
AOPA will be closing at 1:45pm ET on Tuesday, December 6th. We will reopen Wednesday morning at 8:30am ET.
AOPA Members DO more LEARN more SAVE more - Get MORE out of being a pilot - CLICK HERE
News & Media Flight service five years later

Yes, it&rsquo;s been that long since the FAA transitioned most operations to Lockheed Martin

When the FAA signed a contract with Lockheed Martin in February 2005 to operate flight service stations in the 48 continental states, Hawaii, and Puerto Rico, many pilots raised their eyebrows. (The FAA still operates the FSS network in Alaska.) October marks five years since Lockheed Martin Flight Services assumed operations.

When the FAA signed a contract with Lockheed Martin in February 2005 to operate flight service stations in the 48 continental states, Hawaii, and Puerto Rico, many pilots raised their eyebrows. (The FAA still operates the FSS network in Alaska.)

October marks five years since Lockheed Martin Flight Services assumed operations. The initial transition was fairly seamless, and in late 2006 AOPA gave Lockheed Martin a B-plus for its performance. Then came the major meltdown in the summer of 2007. Since then, however, the FAA, Lockheed Martin, and flight service users all agree that the system has been working pretty well.

The past five years saw considerable change. The FAA used 58 facilities and 2,300 employees to deliver flight services. After closing seven facilities in February 2010, Lockheed Martin is providing a comparable level of service with six facilities and 642 employees. Technology makes it possible.

Under its contract with the FAA, Lockheed Martin Flight Services’ performance is regularly measured against 22 established objectives. “It doesn’t really matter how we feel,” said Dennis Roberts, the FAA’s director of flight services program operations, “it’s how you, the customer, feels.” Flight service is a complex program, and 95 percent of its business is general aviation, he said. “It’s an important piece, and one that the FAA wants to pay attention to.”

“I believe it’s gone well. We’re at a good place now on the program,” said Jim Derr, who has managed the program for Lockheed Martin since October 2009. “There are start-up and transitional problems that can come up on a program; 2007 was probably not the best year for us.”

He also said the program, which provides flight-plan filing, opening and closing of flight plans, and in-flight assistance to pilots—and records HIWAS (hazardous inflight weather advisory service) and TIBS (telephone information briefing service) messages and processes notams, among other tasks—has seen volume decreases of 6 percent per year. “[Even] with that, obviously we have a steady state of dedicated pilots who call us. They like the fact that they can call us and talk with a human being.” April through September are the busiest months, with a 20- to 30-percent increase in traffic.

And Lockheed Martin’s performance measurements have steadily improved over time, Derr said. In an independent quarterly review, “We just got an 81 percent, which is the highest that’s ever been achieved on the program.” The previous high was 79 out of a possible 100 points.

Both Lockheed Martin and the FAA review all user comments. “Almost exclusively, they’re very positive,” Roberts said. “We see that as a very strong testimonial to what [Lockheed Martin is] doing.”

Although customer satisfaction is important, Derr said, the key measurements to him are operational errors and operational deviations. “They have a direct safety correlation. If those are tracking up, I’m dropping everything—that’s number one. Nobody wants anyone to be in an unsafe condition.” Pilot report accuracy and flight plan accuracy also are high on his list.

While facility consolidation increases efficiency, Derr said, retaining specialists from closed facilities retains local-area knowledge. Flight specialists are certified for specific geographic areas of responsibility. Any specialist can brief any area, however, and if a pilot opts for the next available briefer, efficient call distribution minimizes wait time. Local expertise might not be needed for an update briefing or when the pilot needs a specific detail, he said. Lockheed Martin Flight Services’ objective is to answer all calls within 30 seconds; in mid-July the longest average queue time was 16 seconds and the shortest was five seconds. 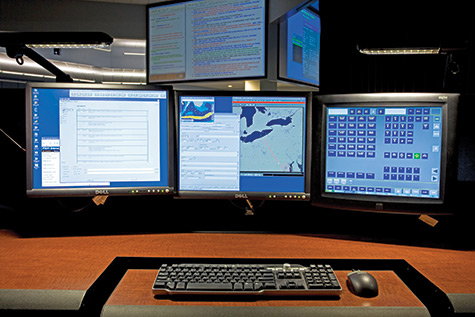 “Whenever you transition a new hardware and software system, there’s a lot of tuning that has to take place,” and that contributed to the meltdown, Derr said—adding that the system has matured since then. “Lockheed Martin does en route [air traffic control] work and we’re familiar with the level of criticality required.”

That year was a low point, agreed Roberts, who has been in his current role for less than two years. “The summer of 2007, I guess, was horrific.” At that time there were congressional hearings, and Rep. Jerry Costello (D-Ill.), chairman of the House aviation subcommittee, still gets performance reports every 90 days. In 2009, 20 of the 22 performance measures stayed in the green. “They have moved up considerably,” Roberts said.

Lockheed Martin’s contract provides an incentive for good performance, and payment can be withheld if service falls short. The FAA withheld about $9.7 million in 2007 for failure to meet various performance measures, an FAA spokeswoman said.

“Going forward I think the numbers speak for themselves. In 2010 we’re doing better with the program than we ever have,” Derr said. He cited a 99-percent system availability requirement that Lockheed Martin is exceeding “significantly. We’re pushing close to 100 percent.”

The company also employs a strong customer focus and constantly seeks feedback. “We don’t know what we don’t know. Our customers need to tell us how we’re doing. We get questions and comments back, and we get criticisms.” All are tracked and receive a response, he said. “We also get a number of compliments.”

Good weather over the Memorial Day weekend resulted in unanticipated high demand for flight specialists, and about 80 calls were dropped. “They personally called every one of those pilots back and apologized,” said Heidi Williams, AOPA senior director of airspace and modernization. “There’s definitely a willingness to provide the customer service that our members have come to expect and demand.”

And a Florida pilot was very pleased with his experience after receiving a text message that his airplane was scheduled to depart Camarillo, California—when it was secured in a hangar near Orlando.

Concerned about potential illegal activity, he called flight service. “I spoke to a very understanding briefer,” Stephen Gatlin said. “He put me on hold and attempted to contact the control tower in Camarillo.” A controller recognized the N number as similar to that of a based aircraft, and it was determined the pilot had made a typographical error entering his flight plan. “This is the kind of service that, although not expected under the circumstances, makes me feel great,” Gatlin said.

The FAA has extended Lockheed Martin’s five-year contract to operate automated flight service stations until 2013, effective Friday, Oct. 1. In this AOPA Live interview, AOPA Senior Director of Airspace and Modernization Heidi Williams discusses the ups and downs over the last five years, how the transformed FSS system stands in October 2010, what goals lie ahead, and some new features that pilots can expect to become available in the short run, and later. Watch AOPA Live >>

“We are constantly looking at new ways to improve the system” and make the experience better for the pilot, Derr said. “We’ve also forged a very good relationship with AOPA. That working relationship—getting close to the pilots—tells us what the thinking is” among pilots. “That’s been a super help.”

AOPA’s working relationship with both Lockheed Martin and the FAA has been very positive over the past year, Williams said. “We will ensure that flight service will meet the needs of the members in a NextGen environment. And we recognize there will still be a need for some form of flight service,” maintaining a “human in the loop” even with increased automation.

Roberts would like to see a pilot web portal, allowing a pilot to get a DUATS briefing and then call a flight specialist who could call up the same images and “walk them through” the information. “That’s high on our list,” he said. “We don’t see a time when we’d ever eliminate the ‘human in the loop.’”

In an ADS-B future, he said, the system could know an aircraft’s position, intent, and capabilities and could push timely information to the pilot—compared with today’s “pull” environment, where the pilot must seek information. Roberts also would like to enhance search and rescue capabilities with an ability to generate an alert when a flight stops proceeding along its planned route.

Improved coordination between systems is another opportunity. Roberts said the FAA manages three different flight service platforms—Lockheed Martin’s proprietary FS21; the online DUAT system, provided by CSC and DTC; and Oasis, which the FAA used for its Automated Flight Service Station network and still employs in Alaska. “All three platforms operate pretty much independently of each other,” he said. For example, a flight specialist cannot open and amend a flight plan filed through DUATS—he or she ends up refiling the plan.

Lockheed Martin is halfway through its 10-year contract, which has a five-year base period and the option for two extensions. A seamless transition into the first extension is expected October 1.