Get the app Get the app
Already a member? Please login below for an enhanced experience. Not a member? Join today
News & Media Mods and mends

The most surprising thing about flying the latest upgrades to the Eclipse 500 very light jet was just how unfamiliar the airplane was to me two years after earning a type rating in it. I had spent many hours in the Level D simulator, but two years is a long time to be away from an airplane. 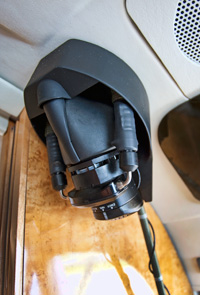 Turbine aircraft fly high, up in the flight levels where true airspeed goes up, fuel consumption comes down, and the weather usually is clear and a million. It’s all good up high, except for one inconvenient truth: We can’t breathe very well up there, if at all.

Of course, pressurization takes care of that by supplying the cabin and cockpit with dense, breathable air so that we can remain usefully conscious indefinitely. However, prudence, not to mention FAA regulations, demands that we be prepared for a problem that would compromise the pressurization system, and that preparation is in the form of an emergency/supplemental oxygen system.

The concept of emergency/supplemental oxygen is simple: It is always readily available to the crew simply by donning special masks, and it is made available to passengers when cabin altitude rises above about 13,500 feet.

The emergency oxygen system is comprised of a storage bottle or cylinder remotely mounted somewhere in the aircraft (typically the nose or tailcone), a cockpit gauge showing bottle pressure, a regulator that reduces bottle pressure of about 2,000 psi to mask-delivery pressure of about 70 psi, a barometric sensor that activates flow to the emergency oxygen distribution system, and masks for the crew and passengers.

The system also includes a filler valve positioned near the bottle that a technician can access to replenish the O2 supply, and an overpressure vent with some sort of indicator that shows the bottle has been depleted. The indicator usually is in the form of a disk plugging the end of the overpressure relief vent that is flush-mounted on the fuselage. If bottle pressure exceeds a certain value, typically 2,700 to 3,000 psi, a relief valve opens, venting the bottle and blowing the indicator plug.

Cockpit controls for the emergency/supplemental oxygen system have become much simpler over time. Older systems required the pilot to set an “altitude adjusting valve” to the airplane’s cruise altitude. This would set the regulator to match the flow rate to actual altitude—the higher the altitude, the more oxygen delivered to crew and passenger masks.

More contemporary systems are more automated. A barometric sensor monitors cabin altitude, and when it exceeds 13,500 feet (plus or minus about 500 feet), the sensor opens a solenoid valve that allows oxygen to flow to masks stowed in overhead compartments in the passenger cabin. The flow opens a door to each compartment, allowing the stowed mask to drop. At that point passengers are supposed to recover their composure and, as instructed in the pretakeoff safety briefing, pull on the mask lanyard to remove a pintle pin from a valve to start the oxygen flowing, after which they don the masks for restored breathing enjoyment. 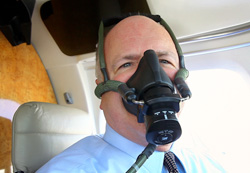 In many installations the crew can use a switch to turn the solenoid valve off to prevent passenger masks from inadvertently dropping and being activated. This design feature is not intended to take unpleasant passengers out of the picture in the event of a pressurization issue. Rather, it is to be used when taking off from a high-altitude airport where the solenoid valve might open. If oxygen pressure fails to kick the mask compartment doors open in an actual emergency, the crew can switch to Manual mode to bypass the solenoid valve and manually start the flow of oxygen to drop passenger masks.

Crew masks range from a standard version with an integral regulator and a switch to select dilutor demand, or 100-percent flow when above 20,000 feet or when smoke or noxious fumes fill the cockpit. Quick-donning sweep-on masks also are available. These, too, incorporate a regulator with diluter-demand and 100-percent-flow settings. EROS-type (Emergency Respiratory Oxygen System) masks have an inflatable head harness that holds the mask tightly against the face for the most efficient delivery.

Oxygen is always readily available to crew masks. Simply don and inhale when set to Normal (diluter demand). At the 100-percent-flow or Emergency setting, a crew mask delivers oxygen under pressure so the wearer does not have to work to inhale. Crew masks incorporate a microphone to communicate with ATC. The mask mic must be switched on to function, but don’t expect much in the way of voice quality. 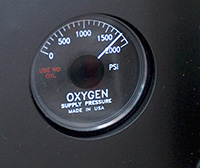 The oxygen system must be checked before each flight. First, make sure there’s enough O2 aboard for everyone on the airplane. (Federal Aviation Regulation 91.211(b) requires a minimum 10-minute supply for each occupant of the airplane if flying higher than FL250.) Check the cockpit pressure gauge to confirm that bottle pressure is in the green range (typically 1,600 to 2,000 psi) so that you know there is enough oxygen on board. Crew masks also should be checked to confirm they are plugged in and operating properly. The preflight walkaround includes a check of the overpressure relief indicator to confirm that it is intact. If it is missing, the oxygen system has to be inspected and the problem corrected before further flight.

A pressurization emergency isn’t the only time a crewmember may have to don an oxygen mask. Part 91.211(b) sets down several rules for mandatory use of crew oxygen, based on your flight level. Here’s one of those rules that is frequently ignored, so remember it well: If flying single-pilot, you must wear an oxygen mask whenever flying above FL350.

The most surprising thing about flying the latest upgrades to the Eclipse 500 very light jet was just how unfamiliar the airplane was to me two years after earning a type rating in it. I had spent many hours in the Level D simulator, but two years is a long time to be away from an airplane. However, the 500 is simple by design and I quickly felt flow patterns coming back to me as Eclipse Aerospace test pilot Jerry Chambers ushered me through the checklists.

Soon N528EA was climbing away from Albuquerque International Sunport. Passing through FL180 at some 2,600 fpm we were doing 170 knots and burning 340 pph per side. The dual Garmin 400 navigators in the subpanel were feeding data to the three large Innovative Solutions & Support displays in the panel. With the Garmin upgrades, our flight plans were showing up on both PFDs and a corner of the giant MFD. Leveling off at FL280, the airplane settled into a 360 KTAS/0.606 Mach cruise while burning 285 pph per side.

There were a number of upgrades to the panel since I last flew it, yet the airplane felt familiar in its heavy roll through the side stick; pitch feel is about right. The upgraded S-Tec integrated autopilot system in the new Avio 1.5 modification package brings a number of handy features to the cockpit. Most welcome, especially for single-pilot operations, is the ability to start a controlled climb or descent with just the touch of a button. Simply dial in the new altitude and punch the Altitude button, and the autopilot will command a reasonable climb or descent. You can fine-tune the rate later if you want, but in busy airspace, you can start up or down right away without a lot of button pushing.

I later sat in the middle row of seats while AOPA President and CEO Craig Fuller had his first Eclipse piloting experience. It was my first time sitting in the cabin and I was impressed by the generous leg and headroom when you slide the middle seats back. Two 110-volt outlets allow passengers to stay productive. The cabin is so quiet you can easily carry on a normal conversation.

What was perhaps most remarkable about our flight was that we could visit the Eclipse factory and fly anything at all. Eclipse Aviation struggled mightily for a decade to bring the VLJ to market. It began deliveries in 2006, but the airplanes, while certified, were missing many of the avionics and deicing systems you would expect in a jet. Some upgrades occurred as the design matured a bit, but financial problems continued and ownership changed until finally in November 2008, after 260 deliveries, the company filed for Chapter 11 bankruptcy protection. When no significant cash infusion materialized, the company filed for Chapter 7 liquidation in February 2009.

Eclipse owners Mike Press and Mason Holland joined up with a group of other owners and investors and purchased the assets out of bankruptcy, forming Eclipse Aerospace. The group paid $20 million in cash and $20 million in a note for the assets, which includes some 30 aircraft that were in various stages of production. Separately, the investors bought 28 airplanes that were in the DayJet fleet. DayJet had attempted to start an air taxi system using Eclipse 500s in the Southeast, but it too went out of business.

Since the acquisition, Eclipse Aerospace has shed its high-tech training center in favor of having pilot training done by SimCom. The Level D simulators will be up and running at SimCom’s Orlando facility this fall. The move trimmed the company’s floor space from 500,000 square feet to 400,000.

A number of Eclipse veterans, including Edward Lundeen and Jack Harrington, returned to the company and helped rebuild the service center. About 40 percent of the fleet has now had various upgrades—including the Avio NG upgrade, which replaces the Avidyne displays in the earliest models with those from IS&S. The Avio NG 1.7 upgrade adds the Garmin navigators and autopilot enhancements along with the ability to show Jeppesen charts and other information on the MFD; it is frequently done in sync with the flight-into-known-icing modification. The upgrades cost from $250,000 to $529,000 depending upon the state of the original airplane.

Press has stated that one of his main goals for the company is to get back into production. However, his first goal is to proceed carefully to keep the company’s cash flow strong. Additional outside investment is being sought to ramp up production. An announcement about that may occur later this year.

“Everyone has a passion for this airplane,” said Press. “The employees, the owners, the investors. We want to be a good steward over this amazing aviation asset. We have a lot of steps to get into production. However, we’re back in business. Parts are available. Mechanics around the world have already been trained. We have authorized service centers and we own two service centers; one in Chicago and [Albuquerque].”

For those who want an Eclipse now, the company is upgrading the DayJet airplanes in inventory to the latest mods under what it calls the Total Eclipse Program. For $2.15 million, customers get a fully upgraded airplane with factory warranty. Former position holders receive a $50,000 discount off the price.