Get the app Get the app
AOPA will be closing at 2:30pm ET Wednesday, November 23rd, and will remain closed Thursday and Friday in observance of the Thanksgiving holiday. We will reopen Monday November 28th at 8:30am ET.
AOPA Members DO more LEARN more SAVE more - Get MORE out of being a pilot - CLICK HERE
News & Media Pilots

Airlinerwise, you can fly direct from New York to Chicago (720 miles, two hours and 30 minutes) or from Atlanta to Miami (660 miles, two hours), but try to get from Melbourne, Florida, to Camp Lejeune, North Carolina. It’s approximately 500 crow-flying miles, but back in 2006 it took one guy, Chris Brink, nearly 14 hours to fly it (with his wheelchair and crutches) commercially on the Department of Defense’s dime.

Airlinerwise, you can fly direct from New York to Chicago (720 miles, two hours and 30 minutes) or from Atlanta to Miami (660 miles, two hours), but try to get from Melbourne, Florida, to Camp Lejeune, North Carolina. It’s approximately 500 crow-flying miles, but back in 2006 it took one guy, Chris Brink, nearly 14 hours to fly it (with his wheelchair and crutches) commercially on the Department of Defense’s dime. A U.S. Marine, Brink suffered a severe leg wound in Iraq, and he wanted to accept his Purple Heart and meet his old company rotating back from Iraq. After his odyssey, Brink’s father called the DoD and told them there had to be a better way. So the DoD phoned Walter Fricke. 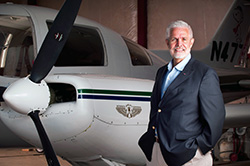 A native of Traverse City, Michigan, Fricke took his first flying lesson at the age of 12, washing airplanes in exchange for flight time. “Eighteen hours of work bought me one hour of flying,” he says. “I think the ratio holds true today as well.” He soloed at 16, and at 18 he joined the Army. “They assured me I would be flying fixed-wing—that was why I enlisted—but I found out they hadn’t had a fixed-wing flight school for warrant officers for three years,” Fricke says. Not a problem, as it turned out. “After flying helicopters for 100 hours I fell in love with them.”

He arrived in Vietnam on April 1, 1968, and was assigned to insert and extract troops from landing zones; he quickly graduated to gunships. That October, the 19-year-old Huey pilot was laying down cover fire next to an LZ for a combat assault when a rocket exploded in the left tube. Debris shot through the cockpit and nearly severed his left foot. Luckily doctors were able to reattach his foot. “It was such a banged-up mess,” he explains. “It clears the ground when I walk most times.”

Within 18 months, Fricke was trying to earn a living as a pilot. But the economy then was as bad as it is now, so Fricke went into the financial services industry. Today, with more than 4,000 hours, he owns a Twin Beagle B.206, a T–6, and an AirCam. He recently retired from flying a T–28 with the Trojan Horse formation aerobatic team. “Everything I’ve wanted, I’ve been blessed to have,” he says. Which brings us around to Chris Brink.

A few days before Brink arrived at Lejeune for the ceremony, Fricke had told the DoD about an idea that he had—the Veterans Airlift Command. It was simple: With Fricke as air boss, the VAC would organize private pilots to transport wounded vets or their family members. “[The DoD] called me and said, ‘Can you help get this kid home?’” he says. “I reached out to a friend, who sent out eight e-mails, and got four responses.” Brink flew back home to Melbourne direct, in a Cirrus.

“I knew we had something that people responded to,” Fricke says. “In two weeks, we had 40 airplanes and volunteers signed up.” Three years later, the number stands at more than 1,500 volunteer pilots and aircraft ranging from a Cirrus to a Gulfstream G–5. And it’s pretty easy to join, Fricke adds: Just call 952-582-2911, or go online.