Get the app Get the app
AOPA will be closing at 2:30pm ET Wednesday, November 23rd, and will remain closed Thursday and Friday in observance of the Thanksgiving holiday. We will reopen Monday November 28th at 8:30am ET.
AOPA Members DO more LEARN more SAVE more - Get MORE out of being a pilot - CLICK HERE
News & Media Something to Savor

An LSA that fills the bill

His airplanes aren’t the fastest on the planet, and they don’t excel in any one particular category, but Van’s Aircraft founder Dick Van Grunsven has cracked the code on designing sturdy, uncomplicated airframes that combine speed, efficiency, economy, and responsiveness—and the new RV–12 light sport aircraft fits that pattern. Using metal construction and a 100-horsepower Rotax 912ULS engine, the low-wing, tricycle-gear aircraft with side-by-side seating and a tip-up bubble canopy seems much the same as others in the crowded LSA marketplace.

His airplanes aren’t the fastest on the planet, and they don’t excel in any one particular category, but Van’s Aircraft founder Dick Van Grunsven has cracked the code on designing sturdy, uncomplicated airframes that combine speed, efficiency, economy, and responsiveness—and the new RV–12 light sport aircraft fits that pattern. Using metal construction and a 100-horsepower Rotax 912ULS engine, the low-wing, tricycle-gear aircraft with side-by-side seating and a tip-up bubble canopy seems much the same as others in the crowded LSA marketplace.

But the RV–12’s differences are subtle and harder to quantify: Its control harmony and visibility are outstanding. Its roll rate (more than 60 degrees per second) is livelier than other LSAs. Its removable wings are far quicker and easier to detach and reattach. And the airplane’s real-world takeoff, landing, cruise, payload, and price ($60,000 for the all-inclusive kit)—measures Van Grunsven describes as “total performance”—are in a league of their own.

“The best thing you can say about the RV–12 is that it flies just like the other RVs,” said Mitch Lock, Van’s East Coast sales representative and builder of N912VA, the first RV–12 made entirely from a production kit. “You fly it with your fingertips because it’s very responsive. There’s no adverse yaw. And the airplane very obediently does exactly what you tell it to do.” 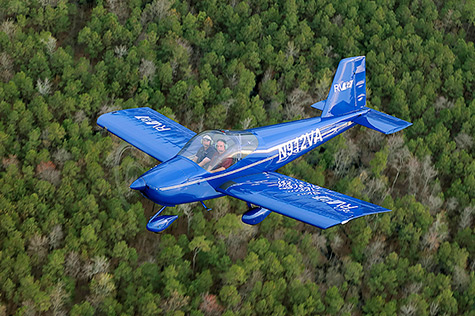 My introduction to the RV–12 took place at the U.S. Sport Aviation Expo in Sebring, Florida, where the wind blowing across Lake Jackson was gusting to 18 knots. I was surprised to see the front-hinged canopy in the open position, but Lock assured me the attachments were strong enough that the wind could do no harm.

This RV–12 weighs 719 pounds empty and 1,320 pounds at gross, giving it a useful load of 601 pounds. It holds 20 gallons of fuel in a rectangular tank located in the fuselage aft of the seats, and the baggage compartment holds up to 50 pounds. The cockpit is 44 inches wide. The RV–12 has flaperons (full-span ailerons that can be drooped to act as flaps but still move differentially) that are deployed with a two-position handle located between the seats. The flaperons can be fully drooped at speeds up to 82 knots. A stabilator with an eight-foot span controls the airplane’s pitch, and the electric trim tab is adjusted by a rocker switch on the instrument panel. Van’s chose a stabilator instead of a more traditional horizontal stabilizer and elevator because the stabilator is lighter, has fewer parts, and by limiting the span to eight feet, highway regulations allow the airplane to be towed on a trailer with the stabilator attached.

A step located in front of each wing allows pilot and passenger to stand on the wing, and then lower themselves into the cockpit without putting a foot on the seats. The canopy comes down with support from a pair of pneumatic pistons, and it latches with the twist of a handle behind the occupants, giving them an unrestricted view forward and above.

Engine start is conventional Rotax—with one unique feature. An electric fuel pump wired to the electrical master keeps the fuel flowing continuously as long as aircraft power is on. The pump is designed to last far longer than the engine’s 2,000-hour TBO, so running the pump all the time simplifies and shortens the engine start, pretakeoff, and prelanding checklists.

Flight instruments are displayed on a Dynon D180 primary flight display/engine monitor with a Garmin GPSMAP 496 providing navigation and weather information; a Garmin SL40 radio handles the communications. The free-castering nosewheel allows impossibly tight taxi turns. Some differential braking is required to keep the airplane moving straight in strong crosswinds, but the nosewheel is designed with some internal resistance so that it doesn’t swivel and shimmy like a wheel on a shopping cart.

A standard takeoff is performed much like a conventional soft-field takeoff: flaperons up, full aft stick to get the nosewheel off the ground as soon as possible, and full power. The rudder is effective immediately and the nosewheel comes off the ground at about 20 KIAS. Back-pressure is relaxed to hold a constant attitude as the airplane accelerates. The best angle of climb, VX, is 60 KIAS, and the best rate, VY, is 75 KIAS.

On an 80-degree F afternoon at sea level with two adults and nearly full fuel, 75 KIAS resulted in a climb rate of 900 feet per minute and a 10-degree pitch attitude. Straight and level at 3,000 feet with the engine turning 5,400 rpm in high cruise, the RV–12 showed 115 KIAS (120 KTAS). This airplane wasn’t equipped with wheel fairings at the time of our first flight, and with the fairings installed, the RV–12 gains about three knots in level flight, bumping the LSA maximum 120 KCAS. In a more economical cruise power setting of 5,200 rpm, the Rotax 912 ULS typically burns 5.2 gallons of fuel an hour (at 115 KTAS).

Power-off stalls with the flaperons up take place at 42 KIAS. Lowering the flaperons all the way drops the stall speed to 40 KIAS. Stalls in both configurations are preceded by light buffeting felt mostly in the stick itself. The break is relatively sharp, and recovery takes place instantly when back-pressure is relaxed.

The RV–12 has a delightfully quick roll rate. Aileron forces are light and well-balanced, and full-deflection rolls from a 45-degree right bank to a 45-degree left bank (or the reverse) take less than two seconds. Lowering the flaperons produces a distinctive nose-down pitching moment that’s easily counteracted with back stick and/or nose-up trim. 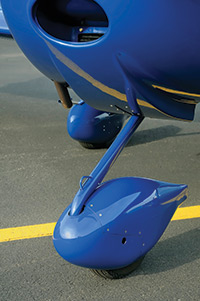 In the landing pattern, the RV–12 flies a normal final approach with flaperons down at 65 KIAS, slowing to between 55 and 60 KIAS over the runway threshold. With the main landing gear on the runway surface, the stabilator provides enough pitch authority to keep the nosewheel off the ground until the aircraft slows to 37 KIAS. A typical landing roll with no wind and light braking is about 450 feet.

“This is the easiest aircraft to land I’ve ever flown in my life,” said Lock, who has built or flown every RV design from the single-seat RV–3 to the four-seat RV–10. “When the wind’s blowing down the centerline, it feels like you touch down at jogging speed.” 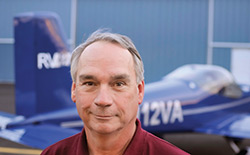 Lock kept a detailed construction log and said it took 555 hours for him to complete the RV–12. He’s a highly experienced aircraft builder, however, and
he figures a novice would take between 800 and 900 hours to accomplish the same thing.

Unlike the early RV kits in the 1970s that Lock describes as “glorified materials packages,” the RV–12 kit includes everything a builder needs except hand tools. Jigs aren’t necessary, structural parts such as spars are complete, and all holes are pre-punched and treated so there’s no drilling or deburring.

“You can literally take parts out of the box, [fasten] them together, and start riveting,” Lock said. Almost all the rivets are pop rivets that don’t require bucking. 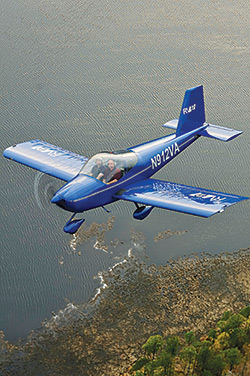 Van’s Aircraft has licensed the RV–12 as both a factory S-LSA and an experimental kit E-LSA, and there’s a great deal of speculation that the company intends to start a factory to produce S-LSAs. Company officials say they’re studying the possibilities but haven’t made any public commitments to build complete RV–12s, or sell the manufacturing rights to another firm.

Lock has flown the RV–12 about 100 hours in the first eight months after building it, including trips from his Maryland home to Massachusetts and Florida. Lock also has access to several faster, IFR-equipped airplanes but says he prefers the RV–12 for its ease of use and simplicity.

“I used to look forward to night approaches in IMC and flying complex airplanes as far and as fast as possible,” he said. “But now that I’ve done those things, I find myself really enjoying the RV–12. You don’t get where you’re going in a big hurry, but you don’t mind so much because the experience itself is something to savor.”

E-mail the author at [email protected] .