Get the app Get the app
Already a member? Please login below for an enhanced experience. Not a member? Join today
News & Media Balloon Fiesta concludes Sunday in Albuquerque

The 2010 Albuquerque International Balloon Fiesta has experienced an exceptional run of good weather this week, with all balloon events—competitions, mass ascensions, and balloon glows—through Oct. 7 taking place as scheduled. The thirty-ninth annual event continues through Oct. 10. 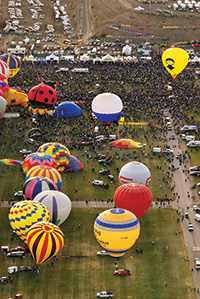 Because of the favorable weather, this year’s Fiesta is likely to draw more visitors than last year, when rain or wind forced the cancellation of several events. (Winds can’t exceed 10 knots at the launch site, but some pilots have lower personal minimums.) The 2009 event drew an estimated 761,864 visitors, as well as 550 registered balloons that came from 38 U.S. states and 16 other countries. Average attendance is typically 850,000 over nine days.

The event takes place at Balloon Fiesta Park, north of downtown Albuquerque. During a mass ascension, the park can launch more than 700 balloons in two hours—from an area the size of 54 football fields. Visitors are encouraged to get up close and personal with the balloons and their crews. Pilots flying in the area should be vigilant for temporary flight restrictions early and late in the day, when the balloon events take place.

One phenomenon that makes Albuquerque an ideal location for the Balloon Fiesta is a wind condition known as “the box.” Under stable weather conditions—when no strong fronts or other systems are affecting the area—sunrise finds cool air moving southward along the surface, while air just a few hundred feet up is moving north, generally at less than 10 mph. By varying their altitudes, pilots are able to take off and then maneuver their balloons to fly back over the launch field. That return frequently involves a competition—perhaps a bean-bag toss or a “key grab,” when pilots try to grab envelopes from the tops of poles that are erected on the site; the envelopes contain prizes that could be cash, a cruise, or possibly the key to a car.

The box will dissipate by midmorning, as the sun heats the ground and rising thermals mix the air—eliminating the low-level temperature inversion that makes it possible.

For more information on the Albuquerque International Balloon Fiesta, or to experience a flight in a hot air balloon, see “ The air up there” in the October 2010 AOPA Pilot.