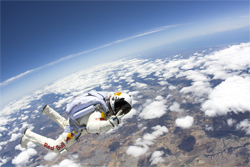 First it was cancellation of the 2011 Red Bull Air Race, and now the Red Bull Stratos freefall record attempt has been canceled until further notice because of a court case filed in Los Angeles. Daniel Hogan claims the project was his idea, which he alleges Red Bull stole while assigning skydiver Felix Baumgartner to break the record.

It was to be a “mission to the edge of space” to break the freefall parachute jump record of 102,800 feet set in 1960 by Col. Joe Kittinger of Orlando, Fla. A small park near Orlando Executive Airport is dedicated in Kittinger’s name.

The new mark was to have been set by jumping from a balloon at 120,000 feet. It was expected that Baumgartner would break the sound barrier during the freefall dive through the thin air.

Hogan claims he proposed the idea to Red Bull officials in 2004 and provided details, even assembling a team of experts to help with the project, until 2005 when Red Bull canceled further talks with Hogan. The project now proposed is, Hogan claims, the same idea he proposed. Instead of 120,000 feet, he claimed he would start from 130,000 feet.

As recently as Sept. 19 the Red Bull website claimed the project was in “final preparations,” and had said it would be “somewhere in North America.”

“It is not a unique idea to beat an existing world record (especially when it is 50 years old). The challenge is to actually beat it,” said a Red Bull spokeswoman.