Get the app Get the app
Already a member? Please login below for an enhanced experience. Not a member? Join today
News & Media Cessna unveils new Citation Ten

Yes, you read correctly, Cessna is calling its significantly upgraded variant of its Citation X the “Citation Ten.” And the difference between the two airplanes goes far beyond the new spelling. Cessna says that the Ten is a thoroughly new airplane, with a redesigned cockpit, systems, and interior. The Ten performs better than the X as well, thanks to redesigned and uprated Rolls-Royce engines. The new engines will be rated at 7,034 pounds of thrust each, and have redesigned fan blades; the current Citation X engines are rated at 6,764 pounds of thrust.

While Cessna boasts of the Citation X’s 0.92-Mach M MO, it has not yet determined the Ten’s maximum Mach number.

But perhaps the biggest news is the Ten’s new cockpit. It features the brand-new G5000 three-tube glass cockpit with four touch-screen control panels. While the G5000 resembles the G1000 at first glance, this is Garmin’s first FAR Part 25-certified avionics suite. The two primary flight displays (PFDs) and split-screen multifunction display (MFD) measure 14 inches diagonally. Part 25 certification provides extra measures of redundancy, event recording, and built-in test capability, among many other higher-order functionalities not available in the FAR Part 23-certified G1000 glass cockpits. The G5000 represents a coup for both Cessna and Garmin. Cessna, because it separated from its conventional reliance on the X’s five-tube Honeywell Primus 2000, and Garmin, because it marks its entry into the large business jet market.

Ten program manager Kevin Steinert said the choice of the Garmin 5000 was driven by “the unit’s ease of use. It’s extremely intuitive, and Garmin has done extensive human factors work to ensure that the G5000 exceeds expectations.”

“Let’s face it,” Steinert said. “Garmin has excelled in every market they took on. They did very well in the Part 23 market, and now they’ve broken the mold in the Part 25 market. This is a real breakthrough moment in business jet avionics.” 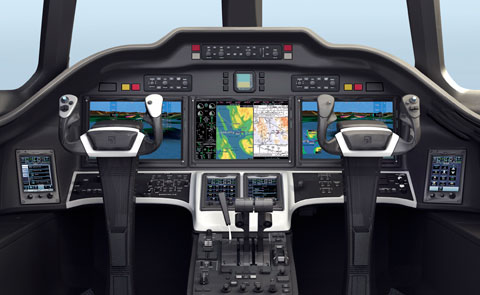 Among the G5000’s many features is its touch-screen interface technology. Like Garmin’s G3000 avionics platform (to be used in the PiperJet), the G5000 uses keypads with keys that use infrared grids to make data entries. Instead of physically pressing on a button, the grid detects a finger’s presence to activate a key. The technology has proven reliable even in turbulence, according to Steinert.

Cessna says that the first flight of the Ten will happen in late 2011. Certification and first deliveries are set to begin in 2013. A price has yet to be announced.