Get the app Get the app
News & Media Embraer preps for Legacy 650 deliveries, touts Lineage 1000 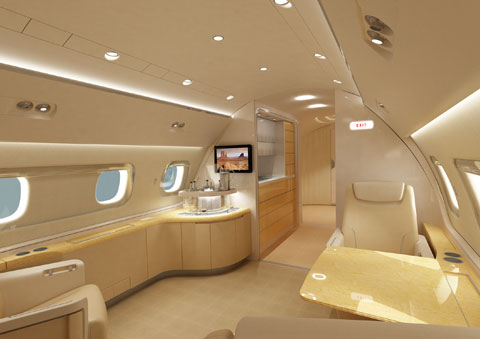 Embraer Aircraft continues its coup of the business jet market with the certification in the next few weeks of the Legacy 650, its sixth new jet in the last five years. The 650 is a longer-range version of the Legacy 600, which was first delivered in 2005. More than 190 of the large-cabin 600s have been delivered since then.

The 650 also provides the latest features from the Honeywell Primus Elite avionics suite and more sound suppression, both of which will be integrated into new 600s beginning in 2011.

For those capabilities, customers will pay an extra $2.2 million over the $27.35 million Legacy 600. 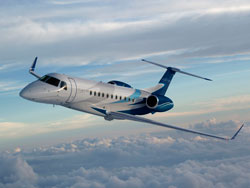 AOPA Pilot’s recent flights in an Embraer Lineage 1000 show how far the company has come in the ultra-large category. The 1000, based on Embraer’s popular EMB 190 110-seat airliner, offers significant value at its $49.25 million price range, which is millions less than other ultra-large aircraft and about on par with smaller ultra long-range airplanes. While the Lineage doesn’t have the ramp presence of a Boeing BBJ or Airbus CJ, it dwarfs the ultra long-range Gulfstreams, Falcons, and Bombardiers. The 1000’s cabin features five zones, including optional master bedroom with private lav and shower (the shower alone is a $500,000 option). The aircraft can carry as many as three lavs. Other interior options include as many as five divans, a bar area, and large lounge with LCDs up to 42 inches. The 1000 features the largest baggage compartment of any ultra-large aircraft, nearly all of it accessible from within the cabin.

When it comes to selecting your Lineage interior, the problem will be in deciding what to select, given the company offers 700 types of fabric, 60 colors of countertop materials, 35 veneers, and some 60 types of carpet, providing thousands of different combinations.

The airplane features a 7,000-foot cabin altitude at its maximum altitude of FL410, 1,000 feet lower than competitive airplanes. 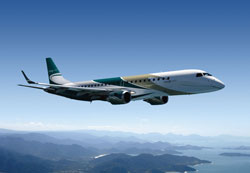 The Lineage provides a 4,500-nm range with up to four passengers on board; bring four more and range decreases by just 100 nm, making trips between New York and London possible as well as Sao Paulo and New York. According to Embraer officials, the Lineage is the largest aircraft approved for operations at Colorado’s Aspen-Pitkin County Airport, its wing span of 94.5 feet just sneaking in under the airport’s 95-foot limit. Landing distances are under 2,700 feet and maximum takeoff distance at max weight is less than 6,200 feet, none of which were tested when AOPA Pilot was on board for a landing in the Lineage on Embraer’s 16,000-foot runway next to its factory in Gavião Peixoto (GPX), one of the longest runways in the world. That factory is the final assembly line and completion center for the Phenom 100 and 300 business jets. However, the converted airliner had no problem squeaking into Rio de Janeiro’s 4,300-foot runway at the Santos-Dumont Airport.

Embraer has delivered six Lineage 1000s over the past 18 months.