Get the app Get the app
AOPA will be closed July 4th, in observance of the Independence Day holiday. We will reopen at 8:30 am ET on Tuesday, July 5.
News & Media Bombardier ups the ante with Global 7000 and 8000 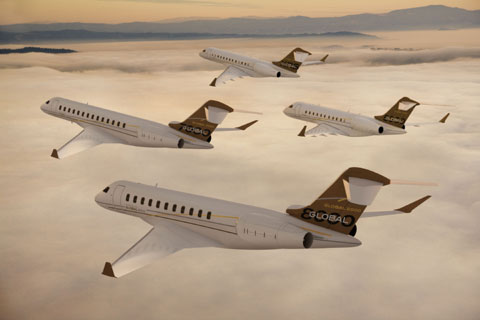 As if to punctuate the end of the ongoing battle among the big three large-cabin, ultra-long-range business jet manufacturers, Bombardier sprung the news that it will build two new globe-spanning models.

The engine will incorporate advanced technologies from both GE's commercial and military engines developed as part of the company's annual $1 billion investment in new technology research and development.

The TechX engine promises 8 percent lower specific fuel consumption than current business jet engines in the 10,000 to 20,000 pound thrust class and greatly reduced emissions. It will produce around 16,500 pounds of thrust and incorporate advanced technologies, such as a composite fan case, reduced weight, lower cabin noise, and lower vibration.

The TechX engine is scheduled to begin testing in 2013. —Alton K. Marsh

The new Global 7000, Bombardier says, will have 20 percent more cabin “living space” than the cabin of the current industry leader, with a cabin volume of 2,637 cubic feet. Presumably, that’s a reference to Gulfstream’s G650 (now in certification trials), which should have a cabin volume of some 2,150 cubic feet. The airplane will also be capable of a high-cruise speed of Mach 0.90, and a range of 7,300 nm when cruising at Mach 0.85. This would best the G650’s target range of 7,000 nm.

Under ideal conditions, Bombardier says that the Global 7000 should be able to fly 10 passengers on such nonstop routes as New York-Dubai or Beijing-Washington.

The Global 8000 has an even more ambitious goal: a 7,900-nm range at Mach 0.85. Ideally, the company says, this sort of range should enable such city pairs as Sydney-Los Angeles, Hong Kong-New York, and Mumbai-New York—all nonstop and with 10 passengers aboard. Like the Global 7000, the Global 8000’s maximum cruise speed is targeted at 0.90 Mach. Its cabin volume, however, at 2,235 cubic feet, is less than the Global 7000’s.

While Bombardier says that the 7000 should enter into service in 2016, with the 8000 to follow in 2017, it also advances certain caveats. The two jets are currently in development, it says, and are thus subject to changes in “family strategy, branding, capacity, performance, design and/or systems. All specifications and data are approximate, [and] may change without notice,” a Bombardier statement said.