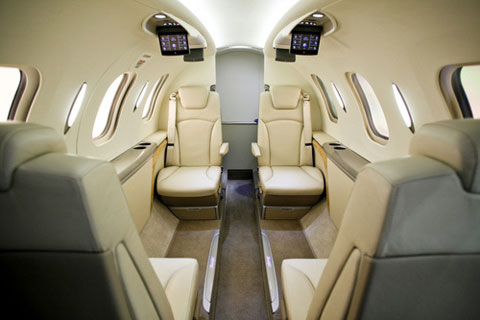 Ground testing has begun on the first conforming flight test aircraft, while a second HondaJet is in static structural testing— all necessary steps toward certification. A third aircraft to be used for certification is in production.

A number of systems tests, including avionics systems, are complete on the first flight test aircraft. Also, complete at suppliers’ facilities are tests of pumps, hydraulic and electrical components, drop tests of landing gear, and crew and cabin seat crash tests.

GE Honda is building 20 engines under a 50-50 joint venture with Honda, 10 to be used for certification and 10 to be used for customer deliveries. The HF120 engine has been ground tested in special test facilities to 46,000 feet and Mach 0.85. The intent is to win FAA and EASA certification in 2011. Test cells have been installed in a plant at Burlington, N.C.

"In addition to the more than 500 flight hours we have accumulated on the proof of concept HondaJet, the successful completion of this robust range of static structural stress tests on the conforming aircraft significantly reinforces the advantages of the HondaJet's advanced design," said Michimasa Fujino, president and CEO of Honda Aircraft Company.

A fourth conforming aircraft will be used for fatigue testing scheduled for 2012.

Honda is now focused on assembly of the third conforming aircraft to be used for flight testing of mechanical systems. The fuselage and empennage for this aircraft have been completed, while the wing assembly nears completion. Final assembly of this aircraft is scheduled to begin soon at Honda's research and development facility in Greensboro, N.C.

At this year's NBAA convention, Honda released HondaJet production cockpit and cabin designs featuring production parts, reflecting the quality of materials, colors, and finishes to be available in delivery aircraft. The HondaJet's cockpit design has been updated to reflect the maturity of Honda's human factors engineering efforts and flight test evaluations.