Get the app Get the app
AOPA Members DO more LEARN more SAVE more - Get MORE out of being a pilot - CLICK HERE
News & Media TFR set for Las Vegas Oct. 22 through 23 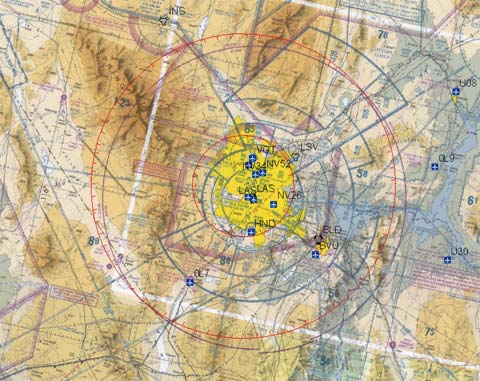 A temporary flight restriction (TFR) will curb access to the three airports in Las Vegas, Nev., and impose other restrictions up to 30 nautical miles from its center beginning Oct. 22 at 5 p.m. local time, and ending Oct. 23 at 10:30 a.m. local time.

Numerous general aviation activities and business operations will be required to cease operations in the TFR airspace while it is in effect, revisiting complications that occurred when other recent TFRs were ordered in Las Vegas and elsewhere.

AOPA has been reminding pilots to be vigilant for increased TFR activity in connection with the movement of VIPs during the fall election campaigns.

When AOPA learned of the new “pop up” TFR, which will affect operations at McCarran International Airport, North Las Vegas Airport, and Henderson Executive Airport, the association contacted the FAA with a request to shift the TFR’s no-fly zone slightly to allow one of the airports to remain open. However, the Secret Service declined to accept the revision.

AOPA President Craig Fuller recently reminded Homeland Security Secretary Janet Napolitano that TFRs can work as intended to provide security for the president and other officials without creating hardship in the GA community, if GA has a voice in their design.

“We are disappointed that again, businesses will be shut down, and no reasonable options were provided to general aviation,” said AOPA Manager of Security and Borders Brittney Miculka.